A Long Discussion on Short-Barrel Shotguns 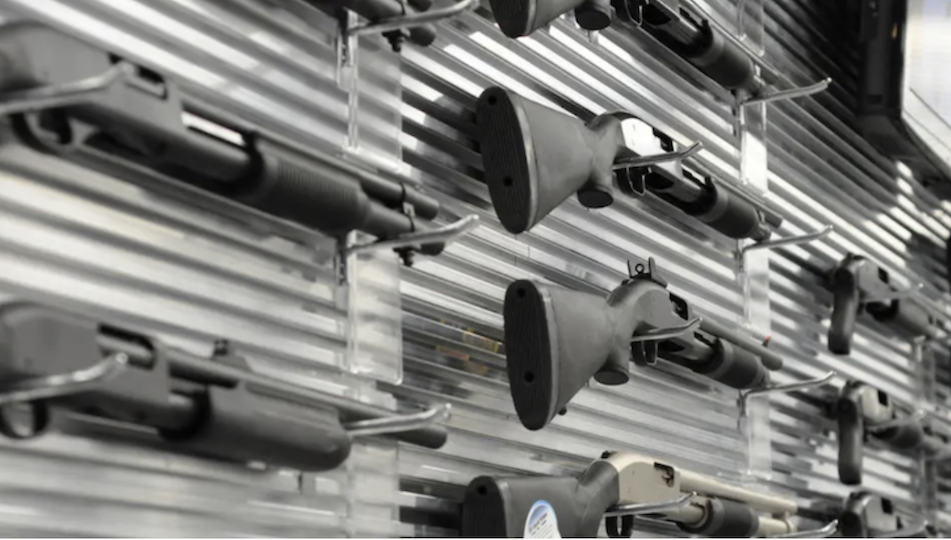 We have received numerous questions regarding a short barrel shotgun the Mossberg 590 Shockwave. Like other pistol grip shotguns it shoots shotgun shell ammunition, has a barrel length of 14 inches, and an overall length around 26½ inches. It is marketed as a non-NFA weapon, which does not require a tax stamp for possession. The question is: “Is this legal, and can I have one in Texas?”

Is this a legal short barrel shotgun? So far so good.

It is important to note that this is a complicated area of the law, which we will see in just a moment. The claims of legality are founded on letters from the Firearms Technology Branch of the ATF. One letter confirms that the forerunner of the short shotgun in question is in fact not a weapon regulated under the NFA.

However, there are several reservations made in the letter itself. First, the letter is in reference to a Mossberg, Model 500 “Cruiser” 12-gauge firearm with a modified barrel. The Shockwave appears to be an updated version of the Cruiser by having a shorter barrel but extending the pistol grip at a larger angle to achieve the acceptable overall length. The letter specifically states that classification is based only on this item and any other item could potentially have a different classification.

It is unclear if another submission was specifically made for the Model 590 Shockwave.

Second, the analysis in the ATF letter consists only of legality under federal law. State law can often differ from federal law and for this reason the letter does not claim to provide any insight into whether this firearm may be possessed in a specific state. Lastly, the letters both state that if the weapon is found actually concealed on a person, the classification could change and at that point meet the definition of an AOW. With this in mind, we can look to the arguments surrounding classification as a non-NFA weapon.

Type of Firearm (The Enigma)

The term “shotgun” means a weapon designed or redesigned, made or remade, and intended to be fired from the shoulder and designed or redesigned and made or remade to use the energy of the explosive in a fixed shotgun shell to fire through a smooth bore either a number of projectiles (ball shot) or a single projectile for each pull of the trigger, and shall include any such weapon which may be readily restored to fire a fixed shotgun shell. 26 U.S. Code § 5845(d).

A shotgun having a barrel or barrels of less than 18 inches in length would be regulated by the NFA.

The key here is that the Shockwave is manufactured with a pistol grip and therefore is not intended to be fired from the shoulder. Due to this distinction, the firearm cannot be classified as a shotgun and therefore cannot legally be a short-barreled shotgun.

Another item regulated by the NFA is any weapon made from a shotgun if such weapon has an overall length of less than 26 inches or a barrel or barrels of less than 18 inches in length. 27 CFR 479.11.

Although it would seem like this should apply to all firearms that fire 12-gauge shotgun shells like the Shockwave, this section has been interpreted to only mean firearms that are “born into the world” as shotguns, and then later modified. The Shockwave is constructed by Mossberg with a pistol grip instead of a shoulder stock. If someone took a normal shotgun with a legal shotgun barrel length, and made modifications to match the Shockwave, this would be a weapon made from a shotgun and would therefore be regulated under the NFA.

A weapon originally designed, made, and intended to fire a projectile (bullet) from one or more barrels when held in one hand, and having (a) a chamber(s) as an integral part(s) of, or permanently aligned with, the bore(s); and (b) a short stock designed to be gripped by one hand and at an angle to and extending below the line of the bore(s). 27 CFR § 479.11.

Now this particular classification is not even considered by any of the letters from the ATF branch. This definition mostly hinges on the idea of the weapon being fired with one hand. Although it would seem clear to most that firearms like the Shockwave need two hands to be fired due to its overall length, a determination to the contrary could be devastating. The determination as to whether or not a weapon was designed, made, and intended to be fired with one hand would be made by the jury based on expert testimony.

If the jury found the idea of having to hold the pump action with the second hand to be unpersuasive (because essentially every firearm needs two hands in order to be chambered) and focused on the part of the definition dealing with the short stock to be gripped by one hand, it could be classified as a pistol… an extremely long pistol. Note that there is no maximum length for a pistol in the definition. In this possible scenario, due to the firearm’s smooth bore, it would automatically be deemed an AOW and be regulated under the NFA. (See the definition of AOW below).

The term “any other weapon” means any weapon or device capable of being concealed on the person from which a shot can be discharged through the energy of an explosive, a pistol or revolver having a barrel with a smooth bore designed or redesigned to fire a fixed shotgun shell, weapons with combination shotgun and rifle barrels 12 inches or more, less than 18 inches in length, from which only a single discharge can be made from either barrel without manual reloading, and shall include any such weapon which may be readily restored to fire. Such term shall not include a pistol or a revolver having a rifled bore, or rifled bores, or weapons designed, made, or intended to be fired from the shoulder and not capable of firing fixed ammunition. 26 U.S. Code § 5845(e).

After evading classification as a shotgun, the AOW definition is the remaining hurdle for firearms like the Shockwave. The AOW is sometimes used as a catchall for firearms that fall through the cracks between the definitions of other firearms regulated under the NFA. Mainly we are looking at firearms that can be disguised as other items or firearms capable of being concealed on the person other than pistols, rifles, and shotguns.

Here we need to find out what it means to be concealable. If you read the letters, you will see that the ATF branch advocates that 26 inches is the magic number to determine whether or not a firearm is concealable. Although it would be nice to have this hard and fast rule, it unfortunately does not appear in the statutes. The ATF branch based 26 inches by looking at what the Congressional drafters of the statute had in mind when it was written. Legislative intent can be good evidence for argument purposes, but it is still an issue when the courts will interpret the statute.

To add to the lack of clarity, one ATF letter states, “because the statute does not expressly indicate any maximum overall length, a firearm measuring greater than 26 inches in length may properly be classified as an AOW if it otherwise satisfies the definition of an AOW and there is evidence that the firearm in question was actually concealed on a person.” The second letter echoes the same idea.

The term “destructive device” means […] any type of weapon by whatever name known which will, or which may be readily converted to, expel a projectile by the action of an explosive or other propellant, the barrel or barrels of which have a bore of more than one-half inch in diameter, except a shotgun or shotgun shell which the Secretary finds is generally recognized as particularly suitable for sporting purposes. 26 U.S. Code § 5845(f)(2).

This is another concept that is not discussed in the letters but could potentially pose problems for the Shockwave’s classification. The definition above includes weapons with a bore of more than one-half inch in diameter. Typically, there is an easy exception since shotguns are specifically excluded. However, if the crowning glory of the Shockwave is avoiding classification as a shotgun, then the Shockwave has also achieved the unintended consequence of excluding itself from exception to the destructive device definition.

At the end of the day, the letters from the ATF Firearms Technology Branch don’t seem to have any major issues with this type of firearm and casually make the claim that under federal law it should not require registration with the ATF. Each person must decide for themselves how confident they are in the letters’ guidance, and whether they’re willing to risk a felony conviction. This leaves the state law perspective to worry about.

Unfortunately, all this analysis does not help very much when we get to the laws in Texas. As noted above, the crux of the argument in favor of the weapon being a non-NFA item is that it cannot be classified as a shotgun under federal law. Federal law looks at whether or not it is intended to be fired from the shoulder. Since the firearm isn’t a shotgun to begin with, then logically it cannot be a short-barreled shotgun.

At first glance, there doesn’t seem to be a difference from the way the federal law classifies these weapons, however without having a clear definition of a shotgun, we cannot determine whether or not the Shockwave is excluded from what Texas courts would consider a short-barrel firearm. In the absence of language in the Texas Penal Code similar to “intended to be fired from the shoulder,” can having a pistol grip instead of a shoulder stock automatically create a firearm that is not a shotgun?

When left without a clear definition, the jury would end up looking at the firearm and deciding whether or not it met the commonly understood definition of a shotgun, which is usually a smooth bore firearm used for firing small shot at a short range.

If in the eyes of the jury the Mossberg 590 Shockwave looked like a shotgun, then due to the 14-inch barrel it would be a short-barrel firearm and possession would be a third-degree felony offense under Texas Penal Code Section 46.05(a)(1). Therefore, we definitely advise caution when it comes to purchasing and possessing this firearm in Texas!