Home / Blog / Coronavirus and Your Right to Carry in Virginia

Coronavirus and Your Right to Carry in Virginia 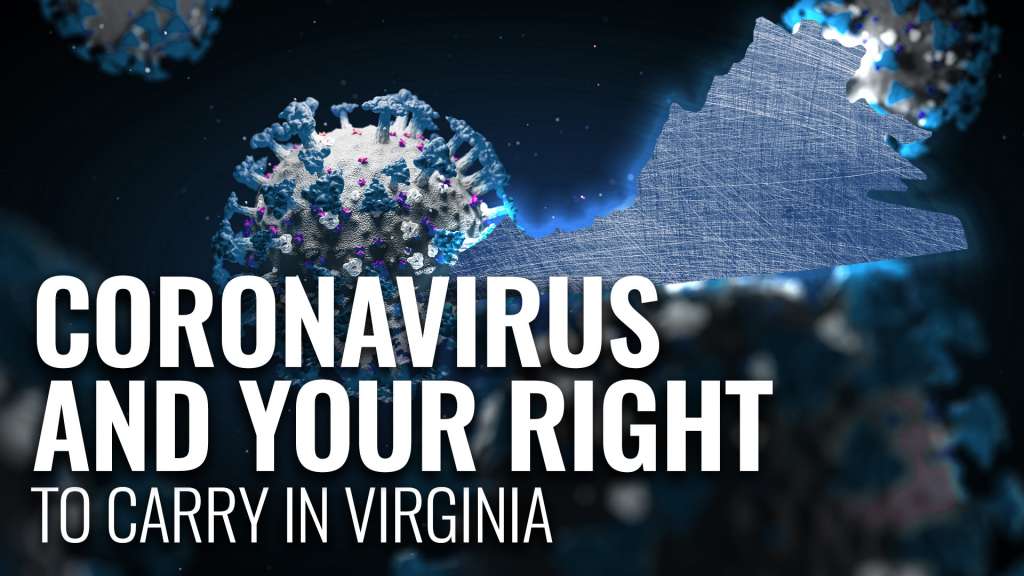 States of Emergency, quarantines, and disaster declarations can bring fear and panic for everyone, due to the uncertainty surrounding them. When state governments throughout the U.S. have varying policies regarding how your rights change, it can be confusing for anyone to fully understand their freedom during these times.

When it comes to your firearms, be assured that we will keep you up to date on any changes in the law that impact your rights.

As for general Coronavirus updates and local and national conditions, the news on these restrictions is coming fast and furious across the nation. Please follow state, local, and national news, as this information can change by the day and hour.

FIREARM RIGHTS DURING A STATE OF EMERGENCY

But how will these declarations and potential quarantines affect your firearms rights? Federal law under 42 U.S.C. § 5207 says that during a State of Emergency the federal government may not seize firearms otherwise legally owned, may not require registration of firearms, and may not prohibit the possession or carrying of otherwise lawfully owned or carried weapons. There is, however, a small exception that allows the federal government to require temporary surrender of a firearm as a condition of entry to any mode of transportation as part of a rescue or evacuation.

However, at the state level many states suspend firearm rights during a disaster. This is concerning, because as panic buying occurs, some individuals may face a shortage of food or other supplies. Any such shortages seem to inevitably lead to looting and other criminal activity, which may ultimately endanger lives.

THE POWER TO LIMIT

Fortunately, in Virginia we have laws in place that largely prevent your firearm rights from being suspended during an emergency. Va. Code 44-146.15 says that, during an emergency, nothing allows the Virginia government to “limit or prohibit the rights of the people to keep and bear arms as guaranteed by Article I, Section 13 of the Constitution of Virginia or the Second Amendment of the Constitution of the United States.” This means that during a disaster, the government does not have the power to limit “the otherwise lawful possession, carrying, transportation, sale, or transfer of firearms.”

There is a small exception in this law (which was used by the Governor during the annual Virginia Citizens Defense League (“VCDL”) Lobby Day in Richmond), which allows the government to limit your firearms rights to ensure public safety in any place or facility designed or used by the governor, or any other political subdivision of the commonwealth for purposes as an emergency shelter. If, for any reason, you are heading to a public government-run shelter, firearms may be restricted.

However, just because additional restrictions on firearms generally do not apply in Virginia, you still need to follow existing laws relating to carrying and transporting firearms within the state. If you go to a medical facility that has a policy prohibiting firearms, and you receive adequate notice of the policy, but you choose to carry a weapon anyway, you may be charged with criminal trespassing.

For any questions on what to do in the event of a State of Emergency, contact U.S. LawShield and ask to speak to an Independent Program Attorney.

Not yet a member of U.S. LawShield? Click here to activate now.