Home / Blog / Firearm Background Checks: What Does ATF Form 4473 Mean to Me?

Firearm Background Checks: What Does ATF Form 4473 Mean to Me? 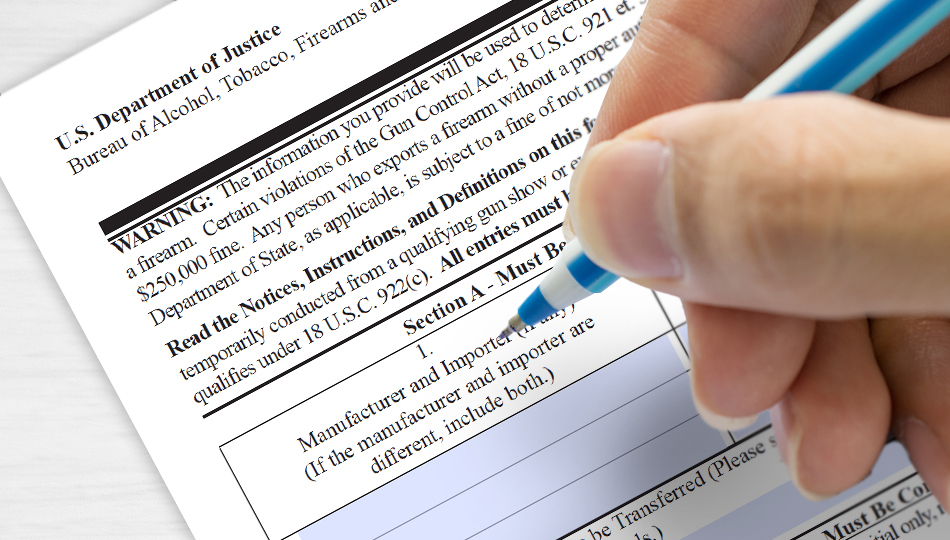 Looking to purchase a firearm from a licensed dealer? In every state across the U.S. today, part of that process involves a firearm background check, the primary component of which is a Firearms Transaction Record, also known as the Federal Bureau of Alcohol, Tobacco, Firearms and Explosives (“ATF”) Form 4473. Completing this form involves divulging personal information, requiring you to trust a retailer, who may be a prime target for thieves.

The stated purpose of forcing people to undergo background checks prior to purchasing a firearm is to ensure that prohibited persons don’t purchase firearms. However, during surges in firearm sales, gaps may appear in the FBI’s processing of background checks, and incomplete reporting from some agencies, mean that it’s a crapshoot as to whether a felon, illegal immigrant, or drug dealer will be denied. Increasingly, there are calls for background checks under the current system to be applied more broadly, which some states have implemented or are attempting to implement.

Let’s break down what happens, and why, in the current firearm background check scheme. Then, you can decide for yourself whether this system deserves to be expanded, fixed, or tossed aside altogether.

When Did Firearm Background Checks Begin?

Given how much the anti-gun Brady Campaign to Prevent Gun Violence (currently called Brady: United Against Gun Violence), complains about inefficiency and the speed with which the National Instant Criminal Background Check System (“NICS”) does its job, it may surprise you to learn that it’s one of the reasons NICS exists.

In 1993, the Brady Handgun Violence Prevention Act (“Brady Act”) amended the Gun Control Act (“GCA”) of 1968 to both expand the list of persons prohibited from purchasing or owning firearms and lay the groundwork to establish the NICS to help enforce that prohibition. The ATF Form 4473 is the aspect of this law that we as gun owners most commonly encounter.

Per the GCA, the list of people who are prohibited from the purchase or ownership of firearms or ammunition is a long one. There are obvious categories, including felons, fugitives from justice, illegal aliens, and anyone who’s been adjudicated as a mental defective. The list also highlights people under restraining orders for stalking or harassment, people with domestic violence convictions, and anyone who’s been involuntarily committed to a mental institution. Some are less intuitive, such as unlawful users or addicts of controlled substances, anyone dishonorably discharged from the U.S. Armed Forces, or those who’ve renounced their United States citizenship.

What’s Involved in a Background Check for Firearms?

When prompted by a Federal Firearms License holder (“FFL”), a licensed firearm dealer, who’s selling you a gun or initiating the firearm background check for a private party or gun show transfer depending on your state and local laws, you must present valid identification according to the laws in your state and fill out ATF Form 4473.

From there, the information you provided is relayed to the National Crime Information Center (“NCIC”) system, either by phone or the internet. NICS then compares your data against three databases: the NICS Indices, the Interstate Identification Index (“III”), and the NCIC databases. Ideally, with a low number of applicants, this process will only take minutes; but the reality is it can take days.

Assuming nothing comes up indicating the purchaser is a prohibited person, the transfer is approved, and payment can then take place. Once payment has taken place, the purchaser can take their purchase home.

If there’s a problem, the FBI has three business days in which to investigate and make a determination regarding the validity of the information indicating that the purchaser may be a prohibited person. In the vast majority of cases, it’s simply mistaken identity, and the confusion is either cleared up, or the three business days expire, the transaction may proceed by default. Some—but not all—states have their own NICS team that assists the FBI in this process.

Federal law requires background checks for firearm purchases from FFLs in all states. If you’re buying a new or used gun from a retail gun store, you’ll fill out an ATF Form 4473.

There are a handful of states that have differing laws on how and when a background check is required, so it’s important to check your state and local laws before attempting to purchase a gun.

What Happens if You Fail a Firearm Background Check?

Most commonly, if a NICS check doesn’t go through, a “Delayed” response is returned. This means the NICS staff needs more time to research.

Often, if you have a very common name or are unlucky enough to have identifiers or an address similar to a prohibited person, this may result in a delay, and NICS will have three business days to make a determination. If a determination hasn’t been made after three business days, the FFL may transfer the firearm unless otherwise prohibited by state or federal law. However, if a firearm background check results in a “Denied” response, this means one of two things: You’re a prohibited person, for one of the aforementioned reasons; or you’ve been falsely identified as one.

If you’re not a prohibited person, and your ATF Form 4473 has been denied, you have an option available. You can file an appeal called a “firearm-related challenge” through the FBI. This process will provide you with both the reason you were denied and give you an opportunity to challenge the validity of that denial. The challenge process doesn’t clear your background check permanently for future purchases, which means you may run into the same issue again. There are more comprehensive appeal processes that may help with this issue, so it’s recommended you contact an attorney before taking these steps.

How Long Is a Firearm Background Check Valid?

Each firearm transaction involving an FFL requires an individual NICS background check, but an approved NICS check is valid for 30 calendar days. If you’re purchasing more than one gun at a time, you may only be required to fill out one ATF Form 4473, and pay for one background check fee, but the FFL may require you to pay a transfer fee for each gun involved in that transaction.

How Long Does a Background Check for a Firearm Take?

It depends entirely on how many people are attempting to purchase a firearm from an FFL at that time. Things can back up significantly around election time, in tax return season, or near Christmas. Federal law requires that a NICS background check take no more than three business days. If it does exceed that limit, then the FFL may proceed with the transaction, although there are those in Congress attempting to change this.

What Do I Need for a Firearm Background Check?

This can vary by state, but at a minimum, you’ll need to bring a state-issued ID card that includes your address and photo, such as a driver’s license. Many states will accept a concealed carry permit/license as well.

Can You Do a Firearm Background Check Online?

Yes, the ATF Form 4473 is available online, but much of it needs to be filled out by the FFL doing your transfer. If you fill it out online, you must send it to them, or print it out and bring it with you so they can complete their section of the form and submit it.

How Much Does a Firearm Background Check Cost?

This can vary depending on the state, and the individual FFL, but in general, you should expect to pay anywhere between $25 - $75 dollars total for the transfer fee and background check fee