Home / Blog / Flag Etiquette for the 4th of July: How to Properly Display the American Flag

Flag Etiquette for the 4th of July: How to Properly Display the American Flag 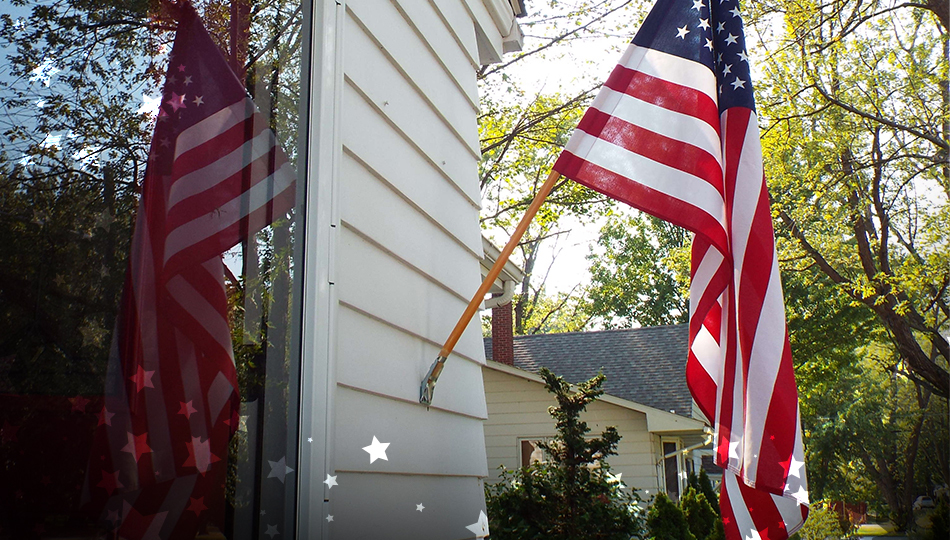 On all days here in the United States, but especially on the Fourth of July--the birthday of American independence--people show their love for America by displaying flags along streets, hanging them from porches, and proudly carrying them in parades and festivals. Old Glory will be everywhere; porches will be festooned with the red, white, and blue and trucks will display them, too. After all, what better way to celebrate a monumental birthday such as the birth of our nation's independence than by displaying the American flag?

Before you hang your flag for all to see, hit the pause button. Do you know there are official rules on properly displaying the U.S. flag?

Yes, there is specific American flag etiquette. This might sound unusual but showing respect and love for the American flag is not only a time-honored tradition, it's the right thing to do as a proud American.

This infographic from USAGov, based on the Federal Flag Code, can help you show respect for the flag as you celebrate America’s 242nd birthday:

What is the American Flag?

This might seem like a somewhat unusual question to raise, but it isn't that odd for a person not to be entirely familiar with what the flag symbolizes. The flag is considered a living symbol of the United States of America's history, freedom, and pride. Originally, the flag displayed 13 stars that represented the 13 Colonies. Today, those original 13 Colonies are represented by the stripes; the red stripes symbolize valor and hardiness while the white stripes represent purity. As for the blue background behind the stars, it stands for vigilance, perseverance, and justice. The stars, of course, represent the 50 states themselves.

Due in part to the fact that the American flag is treated as a living symbol, there are very specific rules about displaying the flag (or flags, should you choose to fly multiple American flags).

What are the Laws about American Flag Etiquette Called?

The rules and regulations regarding both the handling and display of the American flag are found in the Federal Flag Code.

Regarding laws specific to respecting the American flag and flag code violations, according to 4 U.S. Code § 8 - Respect for flag:

No disrespect should be shown to the flag of the United States of America; the flag should not be dipped to any person or thing. Regimental colors, State flags, and organization or institutional flags are to be dipped as a mark of honor.

(a) The flag should never be displayed with the union down, except as a signal of dire distress in instances of extreme danger to life or property.

(b) The flag should never touch anything beneath it, such as the ground, the floor, water, or merchandise.

(c) The flag should never be carried flat or horizontally, but always aloft and free.

(d) The flag should never be used as wearing apparel, bedding, or drapery. It should never be festooned, drawn back, nor up, in folds, but always allowed to fall free. Bunting of blue, white, and red, always arranged with the blue above, the white in the middle, and the red below, should be used for covering a speaker’s desk, draping the front of the platform, and for decoration in general.

(e) The flag should never be fastened, displayed, used, or stored in such a manner as to permit it to be easily torn, soiled, or damaged in any way.

(f) The flag should never be used as a covering for a ceiling.

(g) The flag should never have placed upon it, nor on any part of it, nor attached to it any mark, insignia, letter, word, figure, design, picture, or drawing of any nature.

(h) The flag should never be used as a receptacle for receiving, holding, carrying, or delivering anything.

(i) The flag should never be used for advertising purposes in any manner whatsoever. It should not be embroidered on such articles as cushions or handkerchiefs and the like, printed or otherwise impressed on paper napkins or boxes or anything that is designed for temporary use and discard. Advertising signs should not be fastened to a staff or halyard from which the flag is flown.

(j) No part of the flag should ever be used as a costume or athletic uniform. However, a flag patch may be affixed to the uniform of military personnel, firemen, policemen, and members of patriotic organizations. The flag represents a living country and is itself considered a living thing. Therefore, the lapel flag pin being a replica, should be worn on the left lapel near the heart.

(k) The flag, when it is in such condition that it is no longer a fitting emblem for display, should be destroyed in a dignified way, preferably by burning.

When Can I Display the Flag?

The flag can be displayed outdoors, but there's a specific time of day for display of the flag. According to the Federal Flag Code, it's all right to display your flag outside during the day from sunrise to sunset. If you want to fly the American flag after dark, the flag does need to be lit in accordance with etiquette. However, the Federal Flag Code states you should not fly the flag during inclement weather, unless it’s an all-weather flag.

Where Can I Display the Flag?

On the porch: The union of the American flag–the blue section with white stars–should be placed at the peak of the staff unless the flag is at half-staff. When the flag is suspended from a rope on a pole extending from a house, the flag should be hoisted out, union first, from the building.

On the wall or the window: When displaying the flag on a flat surface like a wall, the union should be at the top left.

On the street: Suspend the flag vertically with the union to the north in an east and west street or to the east in a north and south street. The flag should never touch anything beneath it, so make sure it’s hoisted at the proper height.

On a vehicle: The staff should be fixed firmly on the right side of the vehicle. Do not drape the flag over the hood, top, sides, or back of a vehicle or a boat.

On a boat: There are specific guidelines for displaying flags on boats. According to the United States Power Squadrons, a group dedicated to boating and etiquette, the following must be adhered to when flying flags on boats:

The U.S. national ensign, sometimes called "50-star" or "Old Glory," is the proper and preferred flag for all U.S. vessels. Your boat should wear it from 0800 until sunset, and when you enter or leave port during daylight or at night, weather and rig permitting. While in port, if you leave your boat and will not return before sunset, lower and stow the national ensign before you go.

The national ensign worn by a vessel must be the flag of her registry—not necessarily that of the owner or operator.

Generally, the national ensign should be displayed at the peak of the gaff, i.e., the outer end of the spar extending aft from the mast of your boat—if you boat has a gaff. If it does not, fly it from the flagstaff at your boat's stern. If your boat has an overhanging boom or an outboard motor, your flagstaff may be offset to starboard (preferably) from your boat's centerline.

On a sportfishing boat, where a stern staff might interfere with the gear, and vice versa, the practice is to fly the ensign from a halyard rigged amidships on the after part of the superstructure.

Marconi-rigged sailboats may fly the ensign from the leech of the aftermost sail (or from the back stay), approximately 2/3 the distance up its length. This puts it in about the same position it would occupy if the boat were gaff-rigged.

At anchor or made fast, the ensign should be flown from the stern staff of all boats. The U.S. national ensign has a 10:19 hoist/fly ratio.

By or near other flags: According to the U.S. Department of Veteran Affairs:

What Staff Height for Displaying the American Flag?

You have likely seen the American flag flying at heights other than full staff height. Displaying the flag properly at half-staff is done for he following reasons:

Half-staff: During periods of mourning, it’s common to see the flag flying at half-staff. Only presidents can proclaim such periods for a national remembrance. Governors can also declare mourning periods at a local level. In some cases, heads of federal agencies can order the flag flown at half-staff on grounds under their supervision. Traditionally, states and local governments follow the president’s proclamation during a period of national mourning.

Take care of your flag. Many dry cleaners will clean them for free during the months of June and July. Store your flag in a well-ventilated area. If it gets wet, make sure it’s completely dry before storing it. If Old Glory is damaged or worn out, it should be burned and disposed of with dignity. Learn more  its history, protocol, and ways to pay your respects, including the proper way to fold it.

This Independence Day, show us your patriotism by proudly displaying the old Red, White, and Blue while celebrating the nation’s 242nd birthday.