Home / Blog / If Santa Brings You a Gun… | Pennsylvania

If Santa Brings You a Gun… | Pennsylvania 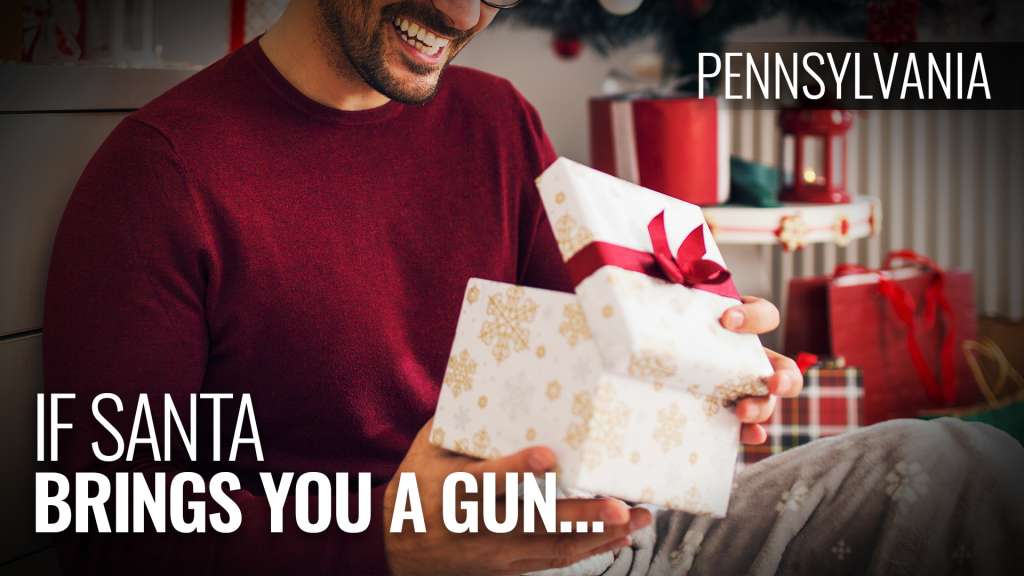 What happens after the Christmas holiday, when you have been given a firearm as a gift? How do you, as the recipient of the gift, stay on the right side of the law? There are a couple important things to keep in mind, no matter what kind of firearm you’re receiving as a gift.

The first thing to know is there are no firearm registries in Pennsylvania. When you are lawfully gifted a firearm, you do not have to go to the local police department to register the gun. There is no such thing. The process for gifting a gun, however, depends on the type of firearm being gifted, and the relationship between the giver and the recipient.

Let’s talk about gifting long guns, such as standard rifles and shotguns. In Pennsylvania, a long gun can be transferred to another person, without going through any sort of paperwork. There is no need to go down to a Federal Firearms Licensee (“FFL”) to process the transfer. If you want to give your buddy, Bobby, a shotgun for Christmas, go right ahead. And when you do, provided Bobby is not otherwise prohibited from possessing firearms, you’re going to be okay.

If you want to gift a handgun the transfer generally must take place at an FFL or the local Sheriff’s Office, with the ATF 4473 and SP 4-113 forms. The firearm recipient will have to fill out the 4473, and go through PICS, just like if they were purchasing it. However, there are exceptions to the requirement of using an FFL or sheriff to transfer a handgun.

According to Pennsylvania law, a transfer of a handgun between spouses, parent and child, or grandparent and grandchild do not require an FFL or sheriff to run a background check, provided no one is prohibited from possessing a firearm. So, if you want to buy your wife a Tiffany Blue Glock, go ahead. Just simply wrap the firearm and put it under the tree, no paperwork necessary. If you want to buy a gun for your sister or your friend Joe, you must process the transfer through an FFL or the sheriff’s office, no exception.

What Not to Do

Now, you have been lawfully gifted a gun; let’s talk about what not to do. The firearm should not be passed around the various guests at the party. It should be kept safe and away from children, obviously. Also, make sure the firearm does not fall into the hands of anyone who is prohibited.

If a container has multiple compartments, the loaded magazine must be in the same compartment as the firearm, to be considered “loaded.” The law also states, “if the magazine is inserted into a pouch, holder, holster or other protective device that provides for a complete and secure enclosure of the ammunition, then the pouch, holder, holster or other protective device shall be deemed to be a separate compartment.”

Although the law only mentions a “secure wrapper,” we always recommend you secure the firearm in a locked, hard-sided case, with the ammo in a separate, secure container. We also recommend you place the gun and the ammo in the trunk or the rear of the vehicle. While heading home, do not make any stops or detours, if you do not have a License to Carry Firearms. Once home, you can bring the firearm inside. There are no “Safe Storage” laws in Pennsylvania, but you should always practice and exercise good judgment. Remember, safety first.

If you have any questions regarding being gifted a gun for the holidays, please call U.S. LawShield and ask to speak to an Independent Program Attorney.

Interested in knowing more? Check out our previous articles “Can I Gift a Gun?,”  “Can I Go to Jail for Gifting a Gun?,” and “Giving Guns as Gifts: Doing It Right.”