Home / Blog / Imagine Protesters Outside Your Home: What Can a Law-Abiding Gun Owner Do in California?

Imagine Protesters Outside Your Home: What Can a Law-Abiding Gun Owner Do in California? 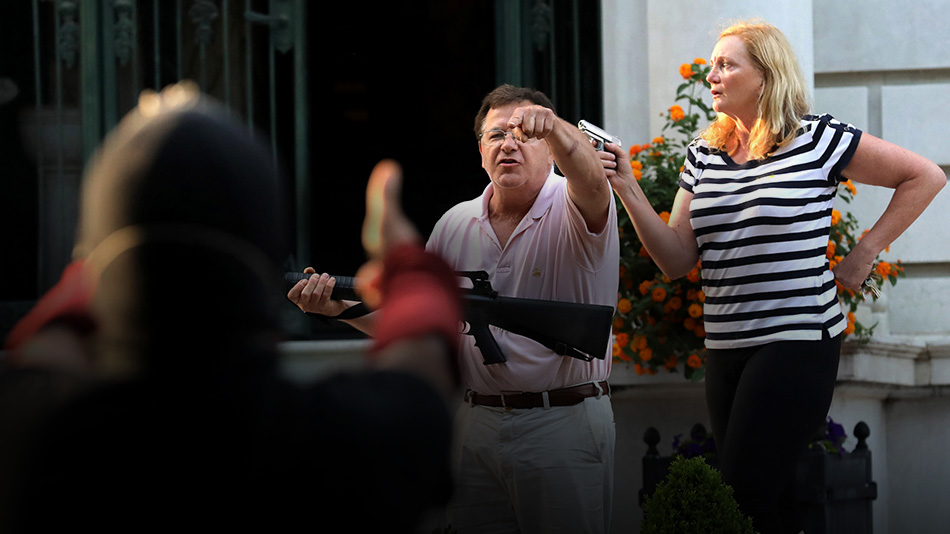 With protests and riots sparking up around the country, many lawful firearm owners in California are concerned that their property may be damaged (or worse) and that their lives may be at risk if violent protesters attack. This article addresses these issues and provides guidance as to what firearm owners in California may and may not do to protect their property and their person. Here’s what an Independent Program Attorney had to say…

Although rioting and looting has broken out and been distressing to us all, the lawlessness had, initially, rarely descended upon homeowners. That said, a highly publicized incident recently occurred in St. Louis, Missouri, where two homeowners were recorded holding firearms outside their home as protesters, supposedly on the way to a protest site, encroached on their property. No shots were fired. Those homeowners’ actions, which involved brandishing weapons as they shouted at the protesters to get off their property, have resulted in felony criminal charges against the couple.

The incident that occurred in St. Louis raises several questions related to California laws surrounding whether a person may use force, deadly or otherwise, or display firearms in defense of home, self, property, or premise. To begin, we don’t necessarily “know” the facts of the St. Louis incident. We may have only half the picture thanks to the media. So, to analyze what the legal consequences of the incident would be if it occurred in California, we must make certain assumptions. Any incident involving firearms being displayed to others invokes Cal. Penal Code § 417, the anti-brandishing statute.

Under this statute, any person who, except in self-defense, draws or exhibits any firearm, whether loaded or unloaded, in a “rude, angry, or threatening manner,” or unlawfully uses a firearm in any fight or quarrel, will likely face a criminal charge. If convicted, the crime is a misdemeanor punishable by a fine, imprisonment, or both. The state has the burden of proof that the defendant did not act in self-defense.

Self-Defense Outside the Home

Self-defense outside of the home is not addressed in the California Penal Code. It may, however, be raised as an affirmative defense at trial through California Jury Instruction 3470. This jury instruction may be requested by a defendant when force is used against an attacker. However, this may not be available to a defendant who uses force or brandishes a firearm to protect property or premise. If a defendant is entitled to raise this defense, a jury would be instructed to consider the following:

When applied to the use of deadly force outside the home, this means the threat to your life must be real, imminent, and the use of force to repel such threat must be proportional to the nature of the threat. You can’t shoot someone unless they really are threatening your life.

If a similar situation to the St. Louis incident were to escalate to violence within a home, California Castle Doctrine would likely apply. Under Cal. Penal Code § 198.5, “any person using force intended or likely to cause death or great bodily injury within his or her residence shall be presumed to have held a reasonable fear of imminent peril of death or great bodily injury to self, family, or a member of the household when that force is used against another person, not a member of the family or household, who unlawfully and forcibly enters or has unlawfully and forcibly entered the residence and the person using the force knew or had reason to believe that an unlawful and forcible entry occurred.”

There are several important parts of that law, detailed below.

First, as the statute provides, this special justification for the use of deadly force only applies when an intruder unlawfully and forcibly enters a home—what most people would call a “break in.” As such, this law does not apply to trespassers on private property outside the home. Nor does it apply to family squabbles that develop inside the home, or even to a previously welcomed guest who is then ordered to leave. There would be no Castle Doctrine defense in any of these situations.

Further, it is also important to know in California, the belief of future harm, possible harm, or even likely harm to property is not sufficient, no matter how great or how offensive the threatening conduct is believed to be.

There must be a reasonable belief the danger of great bodily injury was imminent, the person must then have acted on that reasonable belief, and the person used only the amount of force reasonably believed necessary. Therefore, threatening deadly force, out of belief that future harm may occur due to people standing outside your home and yelling at you, would unlikely be justified in California. In California, generally, a property owner may not use deadly force simply to repel a trespasser from their land.

However, California does provide an additional affirmative defense that may be raised at trial through California Jury Instruction 3476, for defense of real or personal property. This instruction states that the owner of private property may use reasonable force to protect that property from imminent harm. Reasonable force means the amount of force that a reasonable person in the same situation would believe is necessary to protect the property from imminent harm, and a jury would be instructed to consider all the circumstances that were known to the defendant and consider what a reasonable person in a similar situation would have believed.

As such, the use (or threatened use) of deadly force against a trespasser who is likely to cause damage to property would also not be justified under California law, as it would not be considered reasonable force to prevent the harm. This would include the threatened use of deadly force by pointing a firearm at a trespasser on your land or property. Likewise, brandishing or pointing a firearm at protesters who are shouting at a homeowner from a public sidewalk or even just inside the property line in front of the home, would most likely not be a justified use of force under California law.

Under these circumstances, the most legally cautious course is to remain inside your home and call the police. If the rioters enter your house or attack your house physically (such as shooting in windows or hurling incendiary devices), then your right to use deadly force in defense would apply.

If you have any questions regarding self-defense laws in California, call U.S. LawShield and ask to speak to your Independent Program Attorney.