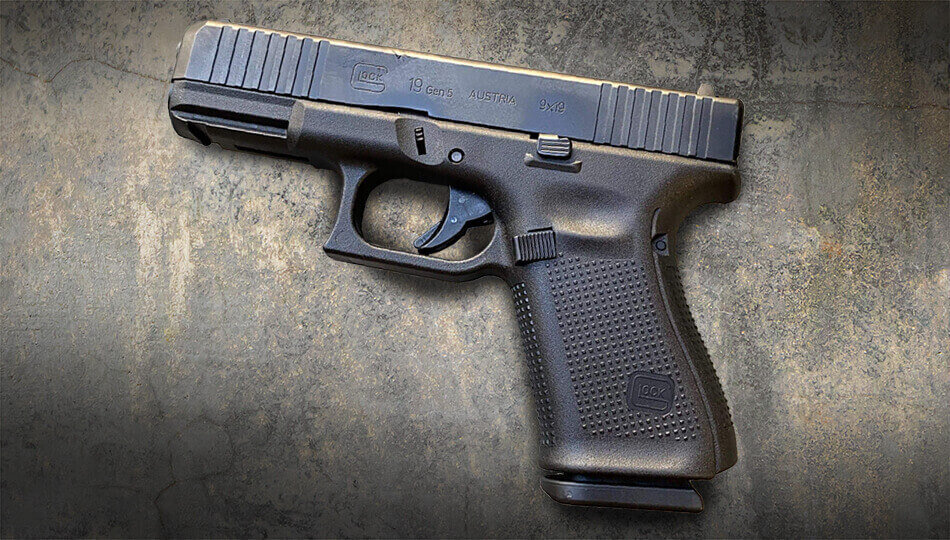 The Glock 19 may not have been the first polymer pistol designed by Glock, but it’s certainly one of the most popular. In fact, in 2020, the Glock 19 was the top seller for some online FFL (Federal Firearms License) holders. What is it about the compact pistol that makes it so popular among gun owners from all walks of life? If you’re curious—or considering picking one up for yourself—you’ve come to the right place.

First, let’s take a look at the history of Glocks in general. Glock can trace its roots back to 1963, but the company didn’t get into firearms design and manufacture until the 1980s. Up until then, they’d been in the business of making injection-molded parts for various purposes. Glock—known at that time as Glock Ges.m.b.H.—edged into the world of weapons by taking on some projects for the Austrian military in the 1970s. Those first products included grenade casings, knives, and machine gun belt links, which basically kept them in their injection-molded lane. But in 1980, the Austrian military decided they wanted to change things up for their duty weapons. That’s when Glock took their step into the firearms world.

The military expectations and trials for a new pistol were as lengthy and in-depth as one would expect. A list of 17 requirements put together by the Federal Ministry of Defense of Austria included features like the new gun being semi-automatic, drop safe, and chambered in 9x19mm Parabellum. It was also hoped that the gun would be relatively cost-effective and not overly complex, and those goals were achieved with Glock’s polymer frame and average of 35 parts per pistol. In 1982, the Glock 17 won those pistol trials and became the standard issue weapon for the Austrian military under the name P80 (Pistole 80). This is relevant because that first pistol produced by the company is essentially the big brother of the Glock 19.

In 1986, the gun maker decided to open headquarters in the United States. They chose Smyrna, Georgia, where they’ve remained to this day.

The Glock 19 was introduced in 1988. It’s the compact version of the full-sized Glock 17 and, like the vast majority of the company’s polymer pistols, retains the same general features. Like the Glock 17, it’s chambered in 9x19mm Parabellum, with a double-stack magazine. Most of the company’s pistols have double-stacks; single-stack modelsdesigned for greater concealability hit the market in 2011 with the 45 ACP Glock 36 but didn’t really enter popular production until 2014 with the launch of the Glock 42, which was chambered in 380 ACP.

The Glock 19 has the polymer frame the company is known for as well as a steel insert within the frame. Its slide is machined from stainless steel, the barrel is hammer forged, and it has a standard capacity of 15 +1. The gun has the factory safety blade trigger found on all firearms from the company and, of course, the internal safeties they’re so well known for. There are currently four generations of the Glock 19.

Does the Glock 19 Have a Safety?

Although Glocks aren’t designed with external thumb safeties, they are made with a number of internal safety features. The gun maker refers to their trio of major safety features as the SAFE ACTION® System. According to the manufacturer, this system continues to perform in temperatures ranging from -40 degrees to 122 degrees Fahrenheit.

At its simplest, the Glock 19 is the compact version of the full-sized Glock 17. For example, the smaller gun has a 4.02-inch barrel rather than the full-sized 4.49-inch barrel. Overall size varies, too; the larger gun has a length of 8.03 inches while the smaller gun’s length is 7.36 inches. These differences make the compact model a better option for concealed carry for the simple reason that its reduced dimensions make it easier to conceal.

There are numerous aftermarket options available to customize Glocks. One of the reasons these polymer pistols are so popular is they’re incredibly customizable. Gun owners can swap out everything from triggers to sights, change the color of the gun, add grip sleeves, and even do their own stippling. Accessories are widely available from countless companies.

The answer of which gun is going to work for an individual shooter depends on a variety of factors from hand size to specific use to experience. It’s accurate to say this model has decades of reliable performance behind it from endless sources. Because the Glock 19 magazine is a double-stack, it’s heavier and not as easy to conceal for some people as single-stack designs. Whether it’s a good first gun depends on who will use it, and it’s wise to do the homework before purchasing any firearm.

Can a Glock 19 Be Concealed?

Yes, it can. A sturdy holster with good retention used in conjunction with a solid gun belt goes a long way toward proper concealment of any firearm. This model was created as a compact for the purpose of better concealment.

This specific model and manufacture fills a niche in the firearms market. According to the manufacturer:

Glock pistols have been designed to operate without compromise in extreme conditions by police and military. Thanks to industry-leading quality assurance procedures, which are continuously integrated in the production process, tolerances are strictly limited and reliable operational safety is achieved. … Glock is certified according to ISO 9001 (quality management) and ISO 14001 (environmental management) requirements.

Torture testing is routinely carried out by gun owners and by Glock, too. Regarding their torture testing process, the company notes:

Arctic temperatures or merciless heat, salt water, mud or sand, professionals throughout the world engage in the most hostile environmental conditions and the same is required of their Glock pistols.Extensive tests are done in-house during the product design process as well as externally during purchasing procedures.

What Is Special About a Glock 19?

Perhaps the thing that marks this model of firearm as “special” is that it’s the second model Gaston Glock designed and the first compact Glock. Otherwise, noteworthy features of the pistol include its polymer frame, proven durability, and more budget-friendly price point.

How Many Generations of Glock 19 are There?

There are currently four generations of the Glock 19 on the market. It’s important to note that not every generation the company puts out includes each model of firearm. For example, fifth-generation guns from the gun maker focused first on those chambered in 9x19mm (such as this one).

What Are the Differences Between Glock 19 Generations?

The first-generation model was the Glock 17; that’s it, that’s the entirety of what is called “Gen 1.” Gen 2 officially started with the launch of the Glock 19 in 1988, so the original guns in that model are actually second generation.

There are differences among the various generations—some external, some internal. Gen 5 had what appear to be the most dramatic and extensive changes. For example, Glock 19s prior to Gen 5 had finger grooves molded into the grips. Gen 5 guns also feature the Glock Marksman Barrel, which the company claims produces more accurate results during live fire, and a flared mag well for faster magazine changes.