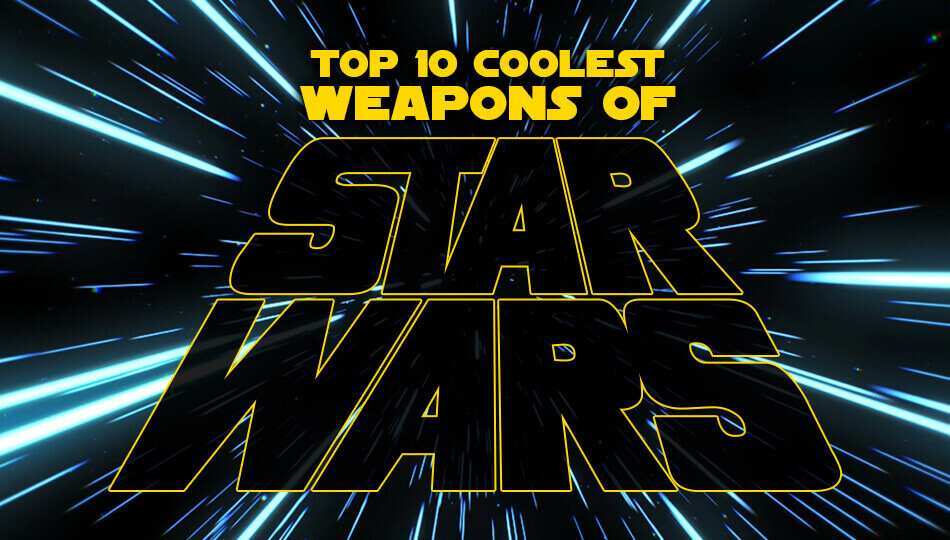 There’s no question that the Star WarsTM franchise hosts some of the best weapons in sci-fi. But out of all the lightsabers, blaster rifles, and flammable weapons shown in this galaxy far, far away, which ones are the coolest? Here’s our list of the top 10 coolest Star Wars weapons.

Easily one of the greatest characters, Han Solo is known for starting—and winning—epic shootouts. His BlasTech DL-44 Blaster has above-average firepower while still maintaining accuracy, allowing him to shoot twice as fast and easily pierce stormtrooper armor. Han’s blaster is so special because it was modified for the smuggler’s specific needs. For example, removing the standard blaster scope lets him have shorter reaction times and be quick on the draw. (We aren’t saying who shot first, we’re just saying Han does have the fastest draw in the galaxy….) In fact, this blaster is so cool, it’s the only pistol Han carries throughout the entire series.

One of the most recognizable weapons used by all Star Wars bounty hunters is the thermal detonator. Essentially a grenade ball, these explosives pack a powerful punch despite being so small. What makes them so cool is they can be timed to detonate whenever the activator chooses, and they can also be deactivated. Of all the bounty hunters, Cad Bane (arguably the coolest one) uses thermal detonators the most often and with the most skill. In fact, Bane’s creativity with thermal detonator timing is what helped destroy the Senate building. So, while thermal detonators in general are definitely cool weapons, it’s Cad Bane who exposes their true potential and earns them a spot on our list.

What isn’t cool about mini rockets with tracking capabilities that can conveniently be fired from your wrists? While several bounty hunters include this weapon in their arsenal, it was made popular by Jango Fett. His MM9 wrist rockets have a complete computer tracking system and uses a variety of rockets (from homing missiles to stunning capsules), allowing him to not only attack from a greater distance, but also incapacitate enemies in a matter of seconds. Jango Fett’s wrist rockets are later upgraded by Boba Fett (his son) to make them super effective against a variety of enemies, including droids and vehicles. Definitely one of the coolest family heirlooms out there.

After parting ways with the Jedi Order, Ahsoka Tano crafts blade-like twin lightsabers with curved hilts to give her more mobility and faster attacks during fights. The new blades are so effective that she easily holds her own in a duel against her former master, Darth Vader. Besides being able to quickly cut down an enemy, these twin sabers are charged with 100% pure Force energy from Ahsoka herself. Known as one of the purest-minded Jedi in the franchise, the white glow of her twin sabers is the symbol of complete neutrality between good and evil in the galaxy. Talk about impressive….

If you’re thinking Chewie’s bow is just a typical crossbow, think again. Bowcasters are designed by Wookiees for Wookiees—and pack a punch that match their size. While these oversized crossbows have a range of only up to 100 feet, they shoot a high-tech metal quarrel covered in plasma energy that explodes upon impact, immediately destroying whatever it hits. And if that’s not cool enough, Chewie’s bowcaster is modified with an automatic cocking system that lets him shoot in rapid-fire succession.

The fight between Darth Maul, Obi-Wan Kenobi, and Qui-Gon Jinn is one of the greatest, and it’s mainly due to the Sith Lord’s double-bladed lightsaber. The saber is actually two separate lightsabers welded together, which allows each blade to operate individually. This makes it hard to “outnumber” him in a fight, since he can easily counter enemies both in front of and behind him at the same time. Plus, it’s a pretty cool “ooh” moment when he ignites the other end of the lightsaber for the first time.

These electric pulse-generating weapons are technically used by General Grievous’ bodyguards, but the cyborg (not droid!) designed the staffs himself. Aside from looking super cool, these electro-staffs are made from a lightsaber-resistant material that makes them formidable weapons against the Jedi. But what makes them really cool is that the energy they produce—which can be adjusted from “stun” to “lethal”—doesn’t harm General Grievous himself. A weapon that can hold its own against your greatest enemy, but never be turned against you? No wonder the Obi-Wan vs. Grievous fight scenes were so satisfying to watch.

There’s no doubt Kylo Ren’s lightsaber looks super cool. In his battle with Rey in those snowy woods, when the red blades come out on three sides like a King Richard-era sword, a lot of us probably wondered if the dark side was really that bad…. But the story behind his lightsaber is what makes it one of the coolest weapons in Star Wars. After turning to the dark side, Kylo Ren modified his original lightsaber to incorporate the ancient Sith Crossguard design. However, he cracked his Kyber crystal (the energy core of lightsabers) in the process, making it extremely unstable and dangerous. There are no coincidences with George Lucas though…. The instability of the weapon is a direct reflection of the internal conflicts and untamed power within the character that wields it. Quite possibly the coolest background story of any Star Wars weapon ever.

Crafted by the first Mandalorian Jedi, this one-of-a-kind black and white lightsaber/sword is the symbol of Mandalore leadership. Originally passed down as a family birthright, the Darksaber—and rule of Mandalore—must now be earned in combat. Because of this ritual, the blade has been in the hands of Jedi, Mandalorians, and even Darth Maul, to name a few.

But the Darksaber is not just a lightsaber…. In addition to having a slightly stronger blade, it’s made from Mandalorian steel which makes it resistant to almost any damage. But what makes this weapon one of the coolest in all of Star Wars? It requires a mental connection to even use it. The Darksaber is controlled and empowered by the wielder’s general thoughts, actions, and emotions. This connection allows them to block or strike without even realizing it. No wonder everyone goes crazy trying to get the blade.

It shouldn’t be a surprise that the Death Star Superlaser is our pick for the absolute coolest weapon in the Star Wars universe—it can destroy entire planets! The superlaser uses the same energy source as a lightsaber and focuses it into a massive laser blast with adjustable power levels. At its lowest level, it can destroy an entire city. And we know what it can do at its highest…. Sorry, Leia. Plus, it can operate within a range of up 420 million km (or about 261 million miles). However, the enormous size of the laser does require almost an entire day to recharge. But you can afford the time if you’ve just sent an entire planet into oblivion.

The E-11 Blaster Rifle is a seriously cool gun. Lightweight with lethal firepower, impressive range, and the best technology, the E-11 is one of the best blasters in the entire Star Wars universe. So, why can’t a single stormtrooper ever actually hit anything?

Let us know if you agree with our choices, or if there’s a Star Wars weapon not on here that you think is too cool to not mention. And as always, may the Force be with you!