Home / Blog / What Is a Suppressor, and Is It Legal?

What Is a Suppressor, and Is It Legal? 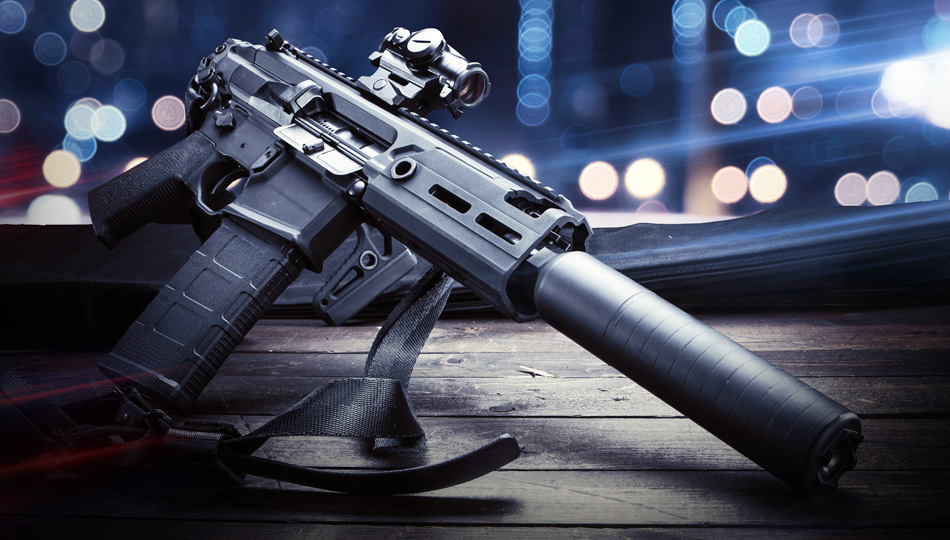 Talking about suppressors can sometimes create more questions than answers. If you’re wondering what a suppressor is, why it’s useful, and how it works, you’ve come to the right place.

What Is a Suppressor?

The simplest way to describe a suppressor is that it’s generally a cylindrical object that screws onto the end of a threaded gun barrel for the purpose of lowering the decibel level created by live fire. Some suppressors, like the SilencerCo® Salvo®, have a different exterior shape than the gun barrel. Others, such as the SilencerCo Maxim9®, are integrated into the gun’s design and cannot be removed. Suppressors don’t truly silence gunshots—Hollywood gets that wrong—but they do muffle the noise enough to protect your hearing from excessive sound levels.

According to the Gun Control Act, “‘firearm silencer’ and ‘firearm muffler’ mean any device for silencing, muffling, or diminishing the report of a portable firearm, including any combination of parts, designed or redesigned, and intended for the use in assembling or fabricating a firearm silencer or firearm muffler, any part intended only for use in such assembly or fabrication.”

How Do Gun Suppressors Work?

The inner workings of suppressors might seem complicated, but they’re actually pretty straightforward. When a gun is fired, the propellants that force the bullet down the barrel are ignited by the primer in a way that creates gases. Those heated gases are pressurized and have to go somewhere; escaping gases make a loud, sudden “shot” sound. The baffles inside a suppressor are designed to redirect and cool escaping gases, muffling the sound of the gunshot.

Suppressors can be specific to a caliber, but they don’t have to be. Some models on the market are designed to suppress a certain range of calibers. But it’s important to understand that suppressors designed for use on multiple calibers tend not to muffle sounds as effectively as dedicated models. They still work, just not as well.

The first suppressor was invented in 1902 by Hiram Percy Maxim. In 1909, it was patented as the Maxim Silencer. That is where the term “silencer” was introduced.

Silencers and suppressors are different words for the same thing. But terminology has evolved in the firearms industry, and because the term “silencer” suggests the complete silence of shots fired, it makes sense that we’ve shifted to referring to them as “suppressors” instead. It’s a more accurate description. But, as shown above, even federal law can and does refer to them as “silencers.”

Suppressors are regulated by the federal government and are subject to the provisions of the National Firearms Act(“NFA”) codified in 26 U.S.C., Chapter 53. The NFA requires both the registration and tax on the manufacture and transfer of suppressors. These items are illegal to purchase or possess without first possessing the proper paperwork and a tax stamp. The requirement to register a silencer or suppressor and pay the $200 tax stamp exists under 26 U.S.C. § 5861. And, at the time of this writing, the process (or wait time between sending in the required documents and receiving the tax stamp) can take several months—almost a year. And remember, until you have successfully registered the item and have received your tax stamp, you cannot lawfully possess the suppressor.

What Are Some Benefits of Using a Suppressor?

There are multiple reasons to consider using suppressors on your firearms. A few of those reasons include:

Even if you are a seasoned shooter who is already experiencing some hearing loss, you can benefit from using a suppressor to protect your remaining hearing. Hearing protection is the strongest argument for suppressor use, and it’s the reason most often cited during attempts to lift the National Firearms Act restrictions on suppressors.

What Is the National Firearms Act?

The National Firearms Act of 1934 put restrictions on the sale of certain items such as full-auto firearms and suppressors. According to the Bureau of Alcohol, Tobacco, Firearms and Explosives:

[T]he original Act imposed a tax on the making and transfer of firearms defined by the Act, as well as a special (occupational) tax on persons and entities engaged in the business of importing, manufacturing, and dealing in NFA firearms. The law also required the registration of all NFA firearms with the Secretary of the Treasury. Firearms subject to the 1934 Act included shotguns and rifles having barrels less than 18 inches in length, certain firearms described as ‘any other weapons,’ machine guns, and firearm mufflers and silencers.

It is worth noting that the Firearm Owners’ Protection Act of 1986 “amended the NFA definition of ‘silencer’ by adding combinations of parts for silencers and any part intended for use in the assembly or fabrication of a silencer.” This is one of the reasons that the use and possession of items, such as solvent traps (which might be purchased online and then used as suppressors), is illegal without the proper registration and tax stamp.

What Is the Hearing Protection Act?

The Hearing Protection Act was the title given to legislation first introduced in the United States Senate in 2015 that would make suppressors easier to purchase. Rather than going through extensive paperwork, extra fees for tax stamps, and potentially lengthy wait times, suppressors would be available immediately for purchase under the Act. This would also lower the cost of buying suppressors, as they’d no longer be “boutique” or specialized items.

In the past, attempts to remove restrictions have failed. The Hearing Protection Act was introduced in 2017, and then again in June 2021 for the 2021-2022 legislative session, but hasn’t moved beyond being read twice. The summary of the bill states:

This bill removes silencers from the definition of firearms for purposes of the National Firearms Act. It also treats persons acquiring or possessing a firearm silencer as meeting any registration and licensing requirements of such Act. The Department of Justice must destroy certain records relating to the registration, transfer, or making of a silencer. The bill also revises the definitions of firearm silencer and firearm muffler under the federal criminal code and includes such items in the 10% excise tax category.

Whether some version of The Hearing Protection Act will pass in the future is anyone’s guess.

Should I Get a Suppressor?

Buying a suppressor through legal channels can be a great addition to your firearms collection for the reasons listed above. Hearing protection, easier communication during live fire, and various hunting benefits make suppressorsuseful tools for all gun owners. Suppressors do, however, have to be registered and a tax must be paid on them, which requires a substantial investment of time and money.