Has Gun Control Saved Lives? Here Are the Facts 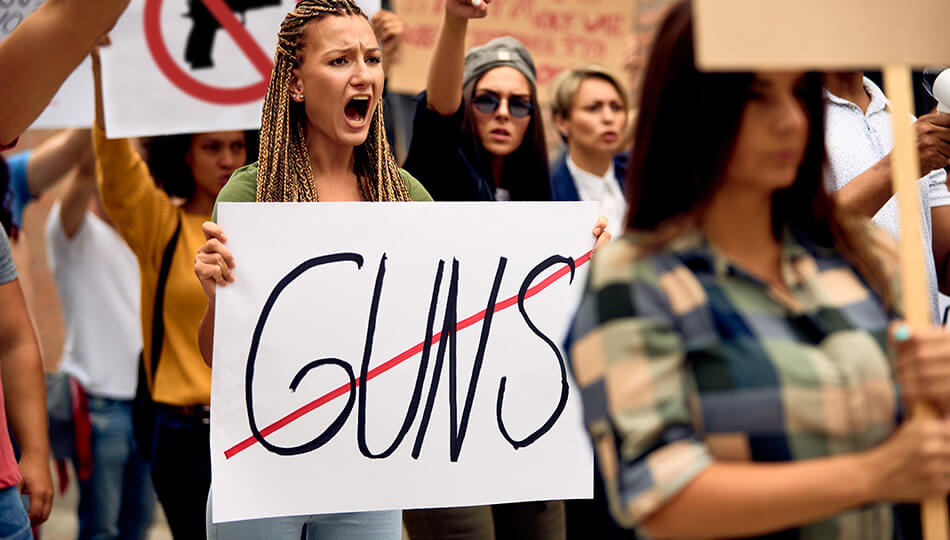 A question that often comes up on both sides of the gun debate is “Has gun control saved lives?” An answer of sorts can be found in studies and statistics, both of which present some of their own downsides and inaccuracies, at times. The simplest answer to this is the most obvious: Criminals behave criminally, and if someone is willing to break the law, creating more laws won’t stop them. In fact, those restrictions typically hinder law-abiding gun owners more than anyone else.

How Many Guns Are in America?

Before we get into gun control-related statistics, let’s consider how many guns are in America. According to a Pew Research study done in June 2021, 4 in 10 adults said they lived in a house with a firearm. GunPolicy.org reported on Bureau of Alcohol, Tobacco, Firearms and Explosives (ATF) findings that there were approximately 242 million firearms for sale or already owned by people in the United States, and that was in 1996, which tells you how outdated that number appears to be. The same study reported those numbers had risen to 310 million by 2009. In 2018, the Switzerland-based Small Arms Survey estimated Americans had about 393 million guns. As of November 2020, the NSSF estimated there were approximately 434 million firearms in civilian possession in the United States. How many guns are in America, really? No one knows, because in the United States part of our Second Amendment rights being protected is that there’s no national registry. In fact, there are federal laws in place that prohibit such registries, such as the Firearms Owners Protection Act of 1986 (FOPA), which revised portions of the Gun Control Act of 1968 (GCA). See 18.U.S.C. § 926(a); 28 C.F.R. § 25.9(b)(3).

There’s no way to know exactly how many guns are in America; suffice to say there are a lot. Taking this a step further, decades of crime show as a general rule, it isn’t the law-abiding gun owners with their legally owned gunscommitting crimes. Keeping that in mind, who do you think gun control affects or helps?

Why Is Gun Control Bad?

Classifying gun control as “good” or “bad” can be difficult, especially since it tends to be a matter of opinion. Instead, let’s consider how effective it is by first looking at how criminals get their guns.

In 2016, the U.S. Department of Justice released a survey of prison inmates detailing how they got their hands on the guns they used in crimes or had on them during the commission of crimes. The survey was done on a national level of both state and federal prisons.

Of those who possessed firearms in the crimes they were currently doing time for, nearly 90 percent got their guns in ways that didn’t involve retail sales. The remaining 10 percent obtained guns through various other methods and “about 1.3% of prisoners obtained a gun from a retail source and used it during their offense.” Frequently, criminals admitted getting their guns by stealing them, with some claiming to have found the guns at the scene of the crime. Many also got their guns off the street in the form of an underground market. As for the so-called “gun show loophole,” only 0.8 percent reported getting their guns from gun shows.

States with strict gun control laws in place don’t necessarily have lower overall crime rates. For example, the state with the most school shootings is California, which, while it is the most populous state, has some of the most restrictive firearms laws in the country.

And as other countries have discovered, people intent on carrying out violent acts will do so with or without access to firearms. In China, where firearms are heavily restricted, mass stabbings and edged-weapon-related murders are a serious problem. Perhaps it’s worth considering that rather than the weapon itself, the problem may instead be related to the criminal who is intent on using a weapon to harm others, regardless of existing laws.

There’s a popular phrase in the gun world that says, “The only thing that stops a bad guy with a gun is a good guy with a gun.” It might be a cliché, but it does hold some truth.

A 2021 National Firearms Survey conducted by William English, PhD of the Georgetown University McDonough School of Business found that approximately one-third of gun owners report having used their firearms in self-defensein some capacity. The same study reported the overwhelming majority—81.9%—of encounters ended with no shots fired. If you examine some other studies on defensive firearms use, they seem to look at use ending in death, not defensive use as a whole.

It’s important to remember there are practically endless examples out there of good guys with legally owned firearmsprotecting not only themselves and their loved ones from immediate threats, but also members of law enforcement.

Owning a firearm doesn’t make you immune to danger and shouldn’t be seen as an absolute shield. It’s a tool that may be used to defend yourself from an immediate, potentially life-threatening attack. Having Legal Defense for Self Defense® from U.S. LawShield® is a good idea for law-abiding gun owners. With a membership, you have access to qualified Independent Program Attorneys who can answer your questions about self-defense laws, including the use of firearms, and should the worst-case scenario take place, you can immediately reach out for help. Take a closer look at a U.S. LawShield® membership by clicking here.

Why isn’t bullet control (as opposed to gun control) being considered?

Actually, there are states where ammunition purchases are heavily regulated. In California, you must show ID and pass a background check to buy ammunition. California is also one of the states that imposes limits on magazine capacity and, in attempting to ban “assault weapons,” requires AR-platform rifles to have certain “evil features”removed by manufacturers before they can legally be sold or possessed. As mentioned above—they’re the state with the highest incidence of school shootings—these restrictions don’t necessarily translate to less crime.

What would happen if gun control was taken to a more serious level?

This depends on what you mean by a more serious level of gun control. If you’re referring to bans like the Clinton-era Assault Weapons Ban, a subsection of the Violent Crime Control and Law Enforcement Act of 1994, which included banning possession of many handguns and other semi-automatic firearms, it means restricting Second Amendment rights in concerning ways. In addition to having a generally inconclusive effect on firearm-related homicides, the original ban had a sunset clause, which is why it ended after 10 years. But when it’s been advocated for by current politicians, a sunset clause is often not mentioned, nor is grandfathering in firearms owned prior to the potential ban going into effect. This would effectively turn law-abiding gun owners into criminals overnight.

Taking away Second Amendment rights entirely would be a serious constitutional rights violation. Although it might be seen as speculation, it’s logical to assume that such steps could create a framework by which other rights, such as our First Amendment freedom of speech, may be curtailed. Even if someone isn’t worried about losing gun rights, they’re still likely worried about losing freedom of speech protections. Chipping away at the United States Constitutionis a recipe for disaster when it comes to the rights and freedoms of Americans and all residents of this great country.

If we don’t need more gun control, then what is it that we truly need to do?

While some gun rights advocates support loosening or removing current regulations, many Second Amendment supporters believe simply enforcing existing gun laws would be sufficient. After all,  there’ve been numerous incidents where a murder or mass shootingtook place because the federal government or U.S. military failed to input critical information on convictions and/or mental illness into the system or identify such existing information.

There are also some who feel a stronger focus on treating mental health issues would result in a lower crime rate in general and, by increasing access to mental health services post-incarceration, recidivism rates would be reduced.

Why can’t we agree on gun control in the U.S.?

It’s normal for opposing political parties to disagree on major issues such as firearms use and ownership. Because gun ownership tends to be such a polarizing issue, politicians and people in positions of power tend to take an extreme stance. As for the average citizen, it’s not uncommon for people who don’t own guns to have trouble understanding why someone else feels the need to own them. This isn’t restricted only to guns owned for self-defensepurposes, either. Hunters are frequently misunderstood by those who don’t hunt.