Home / Blog / Home Defense Plan: What Will the Law Allow?

Home Defense Plan: What Will the Law Allow?

Home defense is an important topic for gun owners, not only because it tends to be the primary reason many people own firearms but also due to its many nuances. When trying to make a home defense plan for your place of residence, you might be wondering what gun to use, how to store or stage it, and what laws might pertain to you when protecting yourself from a violent home invasion. Before planning practical home defense strategies, it’s a good idea to have a general understanding of what it means to defend your place of residence.

What Is Home Defense?

Home defense refers to protecting your occupied residence from a threat, meaning you, your family members, and/or your loved ones must be inside the residence at the time. For example, if you’re out at the grocery store and you’re attacked, that would be a self-defense scenario, not a home defense situation. Generally, you’re already inside your residence when someone forces their way into your home, presents a threat, and leaves you with no choice but to defend yourself.

How Likely Is a Home Invasion?

It’s impossible to predict whether you could become the target of a violent home invasion, but the FBI does provide some statistics regarding their frequency. Before getting into those numbers, it’s necessary to understand the difference between a burglary and a robbery, because they’re different and are reported separately by law enforcement when gathering statistics.

While the specific definitions of “burglary” and “robbery” may differ state-to-state, the Federal Bureau of Investigation (FBI) provides an overview. According to the FBI’s Uniform Crime Reporting (UCR) Program, a robbery is defined as “the taking or attempting to take anything of value from the care, custody, or control of a person or persons by force or threat of force or violence and/or by putting the victim in fear.” They define a burglary as “the unlawful entry of a structure to commit a felony or theft.”

In short, robbery tends to focus on the fact that a human victim is caught up in a theft, while burglary generally pertains to when a person unlawfully enters or remains in a building. Pertaining to a home invasion, you’re probably going to see more stories about “burglaries” than “robberies.” Generally, a person who is woken up to an intruder in the house is probably a victim of burglary (or another serious crime), while a person who is approached in his driveway and “told to hand over the money or else” is probably a victim of a robbery. 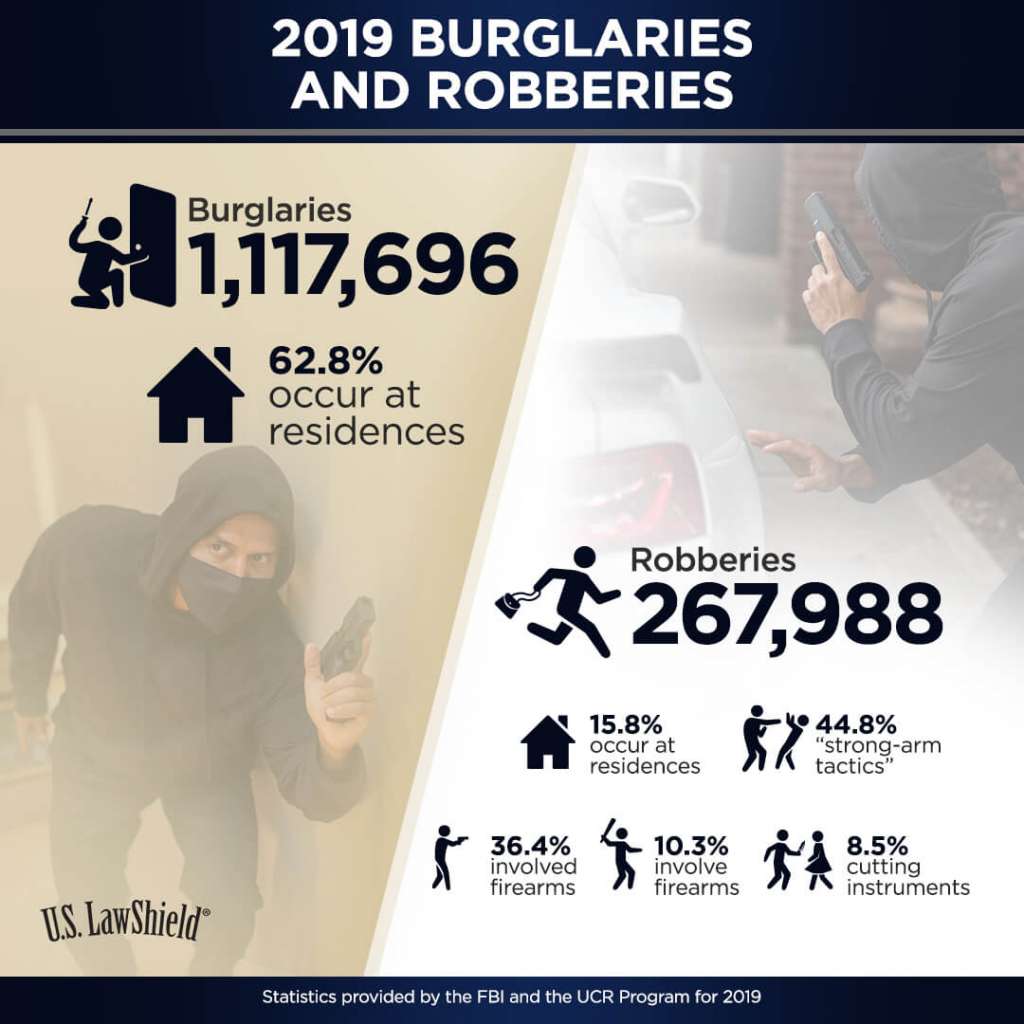 How Many Home Intruders Are Shot Each Year?

There’s limited reliable data available regarding firearms use in self-defense and home defense scenarios. One of the most recent studies is the 2021 National Firearms Survey, which was directed by William English, Ph.D. of the McDonough School of Business at Georgetown University. The survey found: 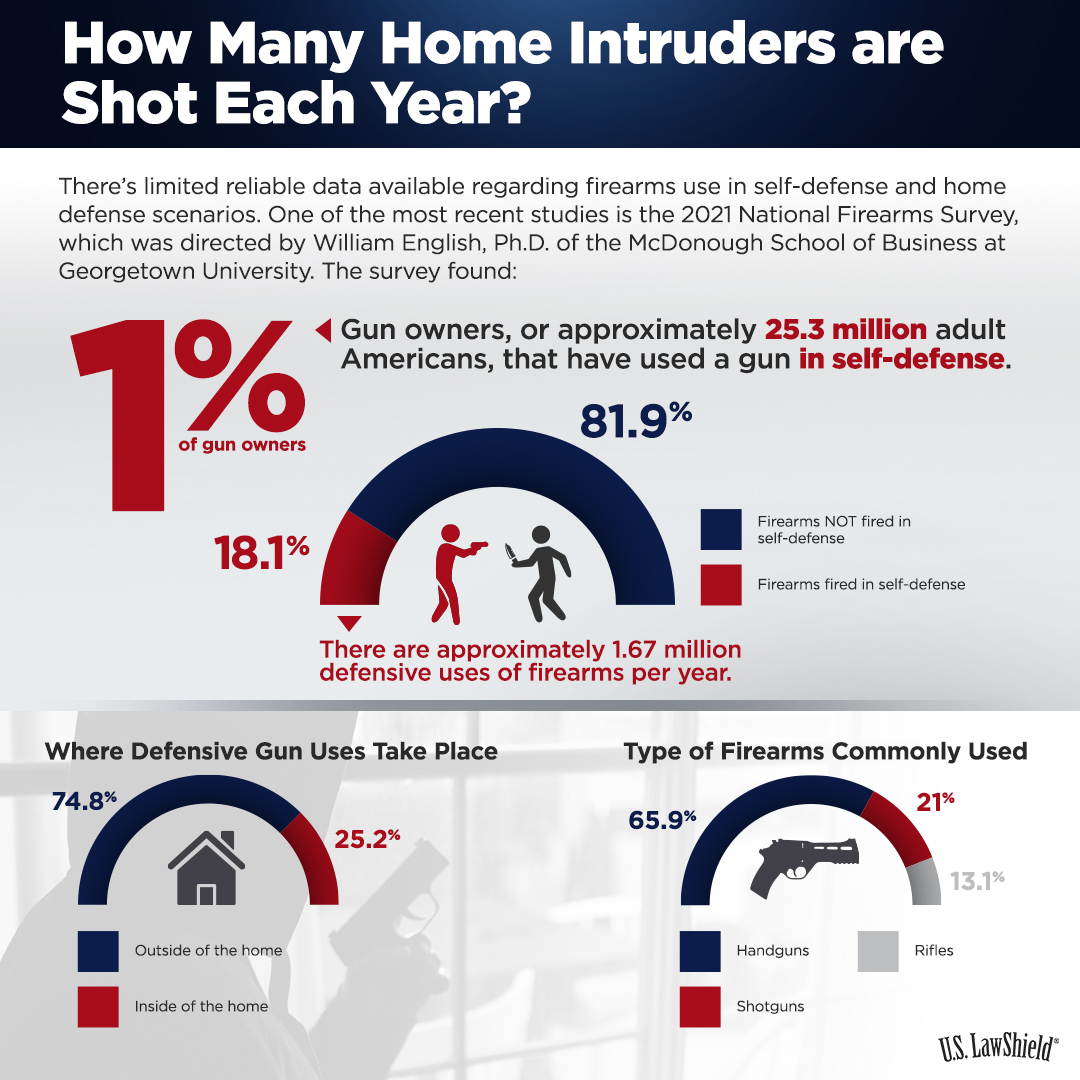 Can I Legally Defend Myself at Home?

Defending yourself in your occupied home in your state can be very tricky. Unfortunately, there is not a one-size-fits all recommendation, which is why we encourage you to reach out to your Independent Program Attorney and ask them what the laws are in your state! For instance, some states may require you to retreat in certain situations, some may require you to use certain levels of force, and some may actually have a presumption of reasonableness for people who defend themselves in certain occupied areas, such as those found in some Castle Doctrines.

What Is the Castle Doctrine?

Castle Doctrine is the legal theory that may allow residents or occupants of a home to use deadly force to defend against violent home invaders. The law will always depend on the state in which you live, which is why it’s vital to know and understand the self-defense laws in your area. Castle Doctrine laws can broaden existing self-defenserights and justification under the law. This means it may give the person who defended themselves an expansion of legal justification in court, offering protection they might not have in a state without a strong Castle Doctrine law.

As noted above, many Castle Doctrine laws also contain a legal presumption. This is used to direct the jury to presume, under certain circumstances, that the person was reasonable in their use of force or deadly force. A legal presumption can help prevent the second-guessing of actions after the fact that many people and jurors are prone to participating in during a self-defense case.

In the most common self-defense cases, if a person is attacked and must use force or deadly force to defend their life or lives of loved ones, the person may likely be justified, if the self-defense situation fits certain parameters. These parameters generally include meeting the reasonable person standard and reasonableness under the totality of circumstances. At their simplest, these terms mean the person acting in self-defense must be defending against an immediate, qualifying threat with a reasonable degree of force. To be covered under Castle Doctrine law, the act of self-defense must occur in one of the locations listed in the law of the state where the action occurred (the “castle”) and must happen under certain circumstances and conditions.

How Do I Protect My Family from Home Invasion?

It is extremely important to know the law and be aware of what your state allows you to do when considering home defense plans. The first step in protecting your family from home invasion is to know your local laws about self-defense and home defense. U.S. LawShield® is here to help you understand those laws. If you’re a U.S. LawShield member and have legal questions about home defense, ask your Independent Program Attorney! If you’re not yet a member, take a look at our membership page to consider joining us and receiving all the benefits of Legal Defense for Self Defense® coverage.