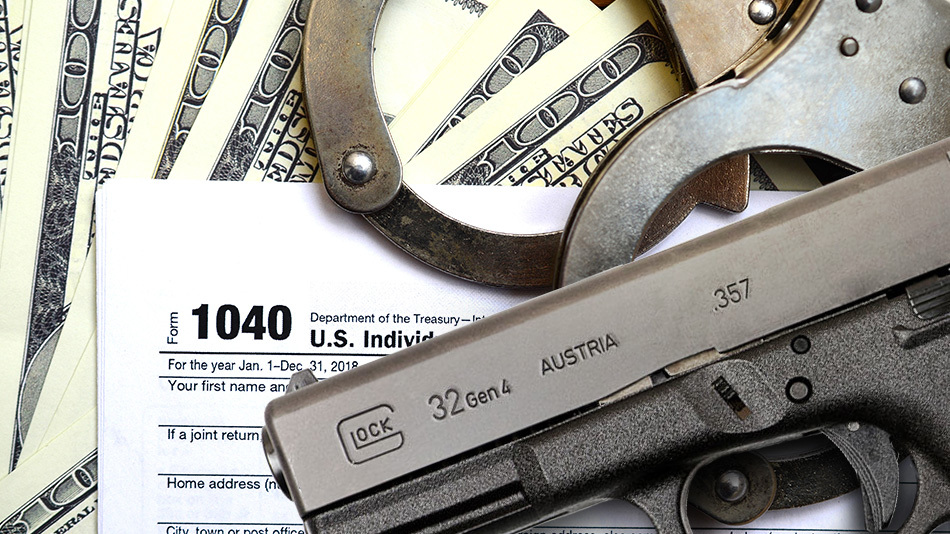 The answer is “a lot”—although it’s hard to track exactly where it’s all going. Still, let’s dig into this question and try to find out how you—yes, you—are inadvertently funding gun control when you pay your taxes.

Thanks to the devious nature of politics and the questionable dealings of politicians, it would be a near-impossible exercise to follow one individual’s taxpayer dollars directly to what we would call a “gun control” organization. Remember, we are paying the government (with our taxes) to do and make things that are supposed to serve our interests as a society. It may not always feel like this in practice, but that is the theory.

In reality, it’s easy to see how the government misuses the dollars you provide as a taxpayer. Take education, for example; often the organizations that receive funds from the government use those funds to teach ideas in schools, create textbooks and videos that are promoted in libraries, and push ideologies that might strongly go against your individual values. All of which is done with funds that you send to the IRS every spring.

The department that will be of primary interest to Second Amendment supporters who are concerned with the infringement of their right to bear arms is the Department of Health and Human Services. This department includes within it two noteworthy agencies: The Centers for Disease Control and Prevention (“CDC”) and the National Institute of Health (“NIH”). According to the missions of each agency, the NIH seeks to “enhance health, lengthen life, and reduce illness and disability” and the CDC works “to protect America from health, safety and security threats,” respectively.

If you worked at either agency, would you assume that researching firearm control would fall under your job description? Does gun control count as a health threat? Until recently, it didn’t due to “the Dickey Amendment,” which is a 1996 federal omnibus bill provision that forbade the CDC from putting research dollars towards anything that advocated for or promoted gun control.

However, things changed in 2018, when lawmakers edited the language of the Dickey Amendment to allow gun control research to begin.

How much of your tax dollars went to the CDC and NIH in 2020? $25 million, to be exact—split down the middle between both agencies for allocation to gun control research.

What do we know about how the money is being used? The CDC says that it has committed “$7,836,869 to fund sixteen research awards under RFA-CE-20-006: Research Grants to Prevent Firearm-Related Violence and Injuries” and that “[t]he purpose of this initiative is to solicit investigator-initiated research to understand and prevent firearm-related injuries, deaths, and crime.”

We’ve yet to see where the rest of the $25 million will go. Those are your taxpayer dollars at work, right there.

Much of the taxpayer money being funneled toward gun control is happening because of the shifting terminology of “gun violence.” The current federal administration has labeled gun violence a “public health epidemic.” And the re-labeling of the Second Amendment as an issue that touches on public health is allowing the administration to allocate funds in new places—which could victimize gun owners and their constitutional right to bear arms.

For example, buried in President Biden’s 11,700-word plan for revitalizing the infrastructure of the U.S. is one sentence that allocates $5 billion over eight years to “evidence based community violence-prevention programs.” These programs treat “gun control” as a public health crisis and would continue to send your taxpayer dollars toward programs aimed at demonizing firearms—whether purposefully or inadvertently.

“Charities” at Work Against the Second Amendment

Another way your tax dollars could be inadvertently funding gun control is through charities—501(c)(3)s and 501(c)(4)s, for example—that promote gun control agendas. Charities, of course, get substantial tax breaks or don’t have to pay taxes at all. There are 29 different types of 501(c) organizations, and one of the most well-known is the tax-exempt 501(c)(3), which is usually a non-political religious, educational, or scientific organization. That’s one of the big designations of a 501(c)(3): they aren’t allowed to get involved in politics. Next down the line are 501(c)(4) organizations, which are social welfare charities that can touch on and lobby political issues as long as politics don’t become the primary purpose of the charity.

You may have heard of one of the most prominent anti-gun organizations out there: Everytown for Gun Safety (“Everytown”). Everytown purports to be “the largest gun violence prevention organization in America.” But did you know this organization is actually registered as a dual charity under the IRS? It’s a sly way of operating: both as a tax-exempt charitable organization and a political lobbying power.

Is That Where It Stops?

Those are just the dollars you can track. But what about the ones you can’t?

In a recent story, an investigation by Fox News showed that banks and financial institutions across the country are slowly severing their ties with the gun industry. In fact, 19 senators wrote and sent a letter to Treasury Secretary, Steven Mnuchin, voicing displeasure that “several of the nation’s systemically important financial institutions (“SIFI”), including Citibank, Bank of America, JP Morgan Chase, and others, continue to use their market dominance to financially discriminate against legal and compliant businesses for political reasons,” including “the firearms and ammunition” industry.

“Financial activism by banks is by far one of the largest emerging threats against Second Amendment rights,” Philip Watson, founder of Washington Public Relations, told Fox News. “The federal government allows the financial industry to receive vast amounts of federal funds; however, those exact same funds free up their balance sheets enough to discriminate and play politics.”

And it doesn’t stop there: see the case of the mom-and-pop store selling replica, non-workable, vintage guns that were banned from “Square,” which is a payment platform. All of these moments seem like concerted efforts to demonize the use of guns and firearms—a constitutional foundation of our country. Where will it stop?

The federal government seems set on moving “gun violence” into the bucket that counts as a public health concern. President Biden continues to call it an “epidemic.” And that means you can expect more and more of your taxpayer dollars to be funneled into research for gun control and against the Second Amendment.

If you have any questions, call U.S. LawShield and ask to speak to your Independent Program Attorney.