The AR-15: Weapon of War, or Ideal Self-Defense Tool? 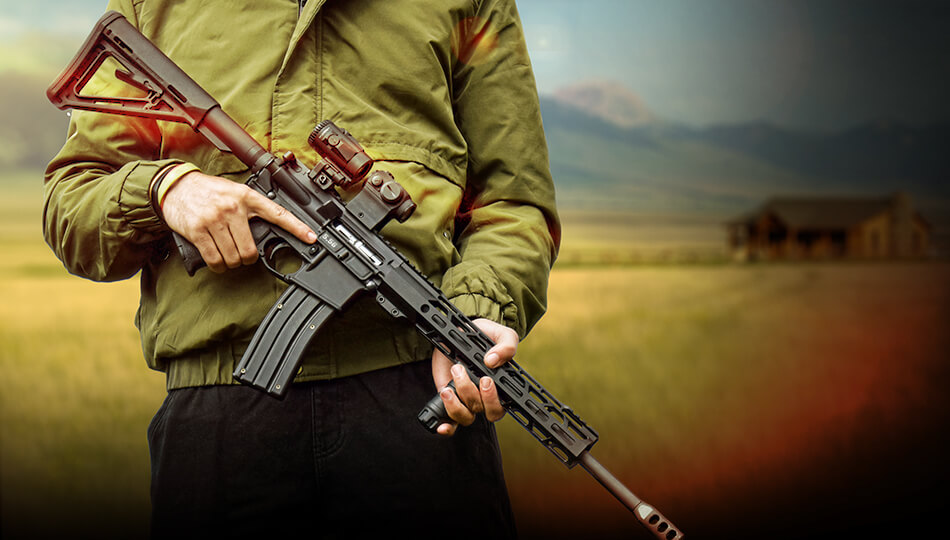 Since at least the 1990’s, the name “AR-15” has been a staple of the national debate surrounding gun control and is as widely used as it’s poorly understood. If you ask a non-gun enthusiast in the United States to name a rifle, the AR-15 is one of the most likely to come to mind, either due to its popularity in video games, media coverage, TV, movies, or from real-life firearms experience.

So, what’s an AR-15, and why is it both famous and infamous? We’ll get into all that below, and hopefully answer any lingering questions you might have about America’s most popular sporting, hunting, collecting, and self-defense longarm.

The AR-15 is a semi-automatic, magazine fed long gun that is commonly chambered for either .223 or 5.56x45mm caliber cartridges, though many others can be found. The .223 is the civilian version of 5.56, with nearly identical dimensions, and any weapon chambered for either will load both. .223 generates lower chamber pressure than 5.56 though, which is why firing the weaker .223 out of a 5.56 rated gun is considered safe, while the opposite isn’t.

5.56/.223 is considered an “intermediate” cartridge, like the 7.62x39mm commonly used by AK-47 type rifles. This indicates that it’s not as large or powerful as a full-size rifle cartridge like .308 or .30-06, but also not as small as a pistol caliber like .45 or 9mm. These particular intermediate cartridges were designed in response to data gathered during and after World War II, which indicated that most fighting was done at 300 yards or less.

This meant that shooting a high-powered, .30 caliber rifle (like the U.S. M1 Garand and M-14, or the British Lee-Enfield) that could make effective hits out to 1,000 yards was no longer a necessity. Smaller cartridges designed for this more realistic combat distance meant each soldier could carry much more ammunition without increasing their already significant burden.

An AR-15 as sold by retailers, (and not classified as a machine gun under the National Firearms Act of 1934) is basically the civilian, commercial market version of the M-16 rifle or M-4 Carbine. It may have different external features, but the primary distinguishing factor is that it can’t fire fully automatic, or in bursts. An AR-15 can only fire one shot per pull of the trigger. M-16 and M-4 are both military designations for different standardized models of the AR-15 platform, and may be capable of semi-automatic, fully automatic, 3-round burst, or any combination thereof.

The AR-15 was developed in the 1950’s as a military rifle, but ArmaLite struggled in making sales. By the end of the decade, ArmaLite had sold their design to Colt, who had the time and resources to develop it, and did eventually get a large contract to produce them as the new standard-issue rifle for the U.S. military.

In most states, yes. There are “assault weapons” bans and magazine restrictions in a handful of states that are intended to make AR-15 platform guns illegal to own. However, in the vast majority of the country, it’s completely legal to own or possess an AR-15 if you’re not a prohibited person.

Many people know the name, but fewer seem to understand what it means. Despite what you may have seen on the news, social media, or heard in political speeches, AR doesn’t stand for “Assault Rifle,” or even “Automatic Rifle.”
“AR” is simply the designation given to the AR-15 platform by the company that initially developed it; ArmaLite, Inc. Thus, AR-15 for “ArmaLite Rifle, Model 15.”

Now that we’ve mentioned the phrase “assault rifle,” it’s worth exploring that term as well. In the terminology of military arms, an assault rifle is any long gun capable of burst or automatic fire, chambered in an intermediate cartridge like 5.56/.223 or 7.62×39. This means that an M-16 or M-4 is an “assault rifle,” but an AR-15 may not be contained in that definition.

Despite this, the anti-gun lobby and the media seem determined to use the term inaccurately to villainize, and even advocate for the ban of, many guns that fall under the umbrella of modern sporting arms. Lately, they’ve started to use the term “assault weapon” to push for banning handguns under the same umbrella.

The features that mark what makes something an “assault weapon” change from law to law, state to state, and include such entirely harmless things as pistol grips, muzzle brakes, and folding stocks.

The M-16 was made famous by the Vietnam War, so much so that it’s difficult to imagine the U.S. experience in that conflict without also picturing a GI in a green uniform, with a steel-pot helmet, and a black M-16. When Colt’s patent expired in the 1970’s other manufacturers started producing their own versions of the rifle, mostly as some variant of the AR-15, for civilian sale.

The strong connection to U.S. service in Vietnam, the futuristic styling, low recoil, modularity, and ergonomic design led to popularity in every major sector of U.S. gun ownership. The lower receiver of the gun (the “frame” of the AR, which is the lower half that retains the magazine, the grip, and the trigger) is the only part legally considered a firearm by law, so you can buy one lower, and have a dozen or more uppers (the top half, containing the chamber, barrel, and charging handle) of different lengths, calibers, and purposes that you can swap out with the push of two pins, and 10-20 seconds.

Such features, and the enormous variety of aftermarket parts available to customize the platform, have helped make the AR-15 one of the most popular rifles available today, and estimates range between 8-20 million of them legally owned in the U.S. today.

AR-15s can also be (comparatively) affordable. AR-15s generally start at a couple hundred dollars, although quality, options, caliber, modifications, and whether the item is new or used can quickly shift the item’s value.

There’s a constant, low-level effort to villainize these popular guns, so it remains a continuing concern. That said, as first-time gun ownership has recently exploded in numbers, so has the sale of this lightweight, ergonomic, and easy-to-use platform. More owners mean more people who aren’t scared by the hype surrounding these firearms, and fewer people who will support a ban. Gun control might seem to have slipped as a legislative priority, but people should still be aware of efforts to ban such items.

While the Second Amendment is never safe from those who oppose it, it’s reasonable to suggest that a ban is not currently in the works.

An AR-15 is good for just about anything you could do with a long gun, short of easily taking down big-game animals. Some areas even limit hunting with .223/5.56 because the projectile is relatively small. But if you’re looking for small to medium game, or varmint hunting, long-range sport or recreational shooting, competition events, or simply collecting interesting firearms, the AR-15 has a variant in a caliber that can do it. From .22LR to .50 Beowulf, and from pistol-sized to sniper rifle length, the ArmaLite Rifle series of guns is a multi-purpose jack-of-all-trades, which can do most things, and fit most budgets.

Become a part of the nation’s best Legal Defense for Self Defense® Program and get armed, educated, and prepared today.