Home / Blog / Carry a Gun? Here’s What You Need to Know About Concealed Carry

Carry a Gun? Here’s What You Need to Know About Concealed Carry

Concealed carry is the practice of carrying a concealed weapon (typically a handgun) on one’s physical person while taking steps to ensure that the presence of the firearm is undetectable to casual (or trained) observers. Concealed carry is often accomplished by securing the firearm or firearms in question in a holster specifically designed to aid concealment underneath everyday clothing.

While there are many ways to practice concealed carry, handguns are generally worn in a holster near someone’s waist, either inside the waistband (“IWB”) or outside the waistband (“OWB”) of the person’s pants or skirt. By covering the firearm with a shirt or blouse and selecting a well-designed concealed carry holster, it is possible to minimize or eliminate the outline of the firearm through someone’s clothes. When the shape of a firearm is visible underneath clothing, it is referred to as “printing.” Minimizing or eliminating printing is one of the primary goals of people who conceal carry.

How Did Concealed Carry Become Popular?

Are There Advantages to Concealed Carry?

There are two methods of carrying to consider when choosing to carry a handgun. The first is when the firearm is carried unconcealed and visible to other people—known as “open carry.” The second, as discussed and defined earlier, is concealed carry. Some state laws allow for both methods of carry, but the availability of open and concealed carry varies from state to state. For handgun carriers who have the option to carry either openly or concealed, the decision as to which method is right is highly personal.

The primary advantage to concealed carry is that, when done correctly, only the person carrying knows there are firearms present. This ultimately allows the handgun carrier more control over whether a firearm becomes introduced into a situation, and if it is, when that should happen. Whether it’s an interaction with a stranger in a social setting that begins to turn violent or an encounter with a criminal who intends to do harm, the concealed carrier can decide if and when the other person will learn there is a firearm present. People who choose to open carry largely forfeit that choice, limiting the options available to them to resolve self-defense situations. 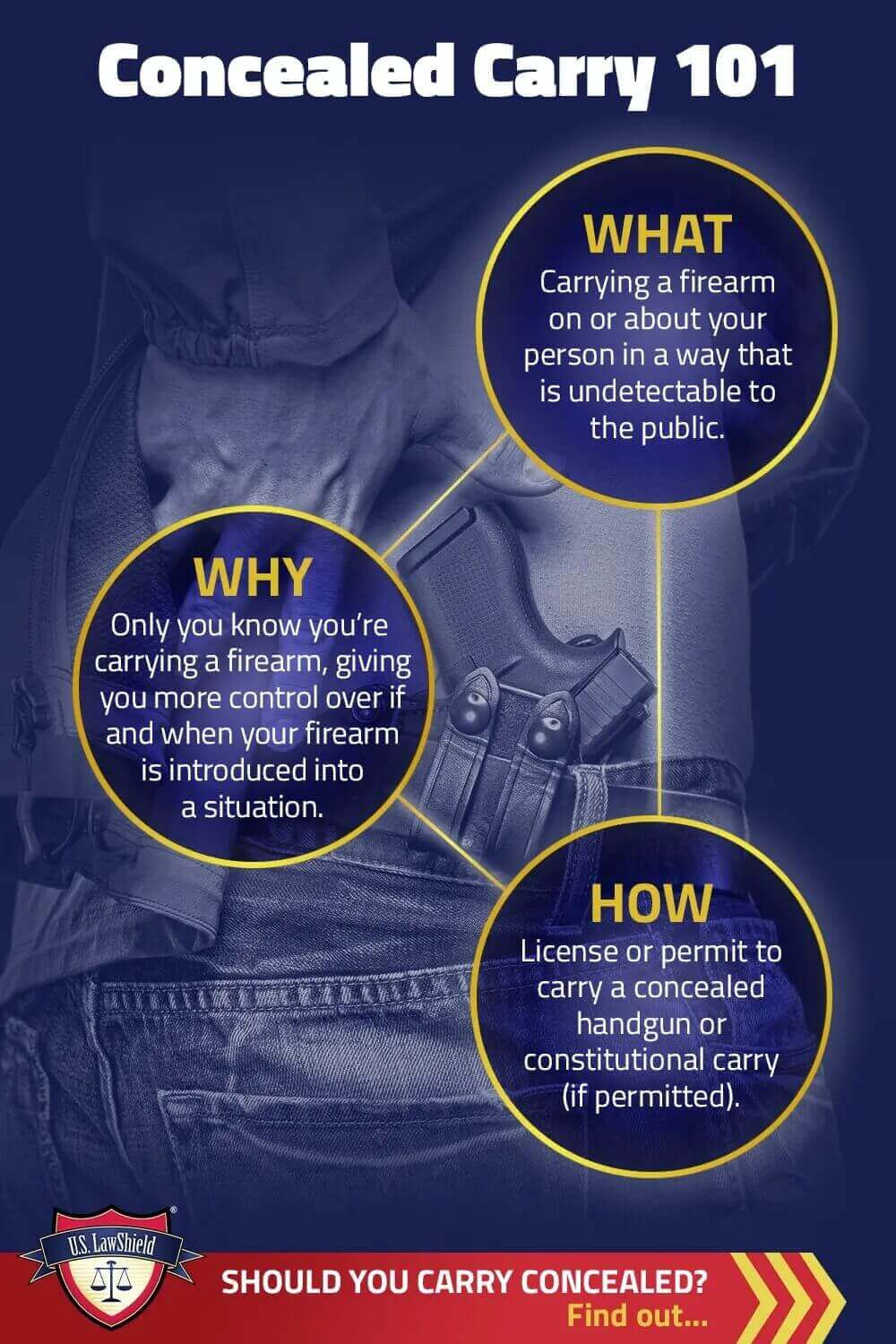 Concealed carry laws vary greatly throughout the country and depend on your state of residence. What type of firearms you are allowed to carry, where you can carry, and how you must carry also vary per state. Most states have specific restrictions on what constitutes notice of prohibition for carry and whether “no guns allowed” signs have the force of law.

Do I Have to Tell a Law Enforcement Officer I have a Concealed Carry Permit?

The laws regarding whether or not you are legally required to inform a law enforcement officer you have a firearm on you vary by location. In some states you have a duty to inform and in others you do not. It’s your responsibility as a gun owner to familiarize yourself with the laws and follow them. If you do tell a law enforcement officer about your firearm, don’t make it your life story; keep it simple and to the point. Be aware some states also allow the officer to take possession of your firearm for the duration of the traffic stop or other police interaction.

Are There Federal Concealed Carry Laws?

How do I get a concealed carry permit for all states? One of the only federal laws that allow people to legally concealed carry almost everywhere is H.R. 218, otherwise known as the Law Enforcement Officers Safety Act of 2004. H.R. 218 allows specific qualifying individuals, namely current or retired law enforcement officers, the ability to carry most firearms concealed, notwithstanding any state or local law. It is important to note that there are specific requirements to be eligible for H.R. 218, and H.R. 218 does not generally allow an individual carrying a firearm or firearms to ignore state or local laws concerning where it is legal to possess a firearm inside of the state.

What Kind of Gun Qualifies for Concealed Carry?

Again, this is going to depend on your state of residence. Some states have caliber and magazine capacity restrictions. Certain places require that the weapon you’re carrying be a handgun rather than other types of firearms. Others impose no such restriction, and in fact, obtaining a permit may allow an individual to carry many types of weapons concealed on their person. Most people who choose to carry firearms concealed on their person choose a handgun to carry.

Do I Need a Permit for Concealed Carry?

Whether you need a permit to carry a firearm concealed on your person will depend on the state in which you live. Currently, every state in the country has some form of concealed carry, though certain places make it so difficult (or virtually impossible) to obtain the permit needed that, in practice, there is little to no concealed carry allowed in that state (Hawaii is one such place).

Currently, 21 states have passed or instituted some form of constitutional carry. In states that have passed permitless carry, there is no requirement that you obtain a permit before carrying a firearm, though the option is still available in every permitless carry state except Vermont, as Vermont has never required a permit to carry a gun. Generally, even if your state allows permitless carry, it’s still a good idea to go through the permitting process if you have the resources to do so.

How Do I Get a Concealed Carry Permit?

The department is charge of concealed carry permits has a different title depending on the state, including: Weapons Permit Unit, Permit and Licensing Unit, Pistol Licensing, and Concealed Handgun Permit Unit. A quick search can help you locate the department in charge of licensing in your area. For example, if you want to get your Arizona CCW Permit, you’ll need to look for the Arizona permit contact for concealed weapons, which is handled by the Arizona Department of Public Safety.

Should I Have a Concealed Carry Badge?

It isn’t unheard of for an online site to advertise a “concealed carry badge” and present it as a special item for certain gun owners. Such badges do not have a legal purpose and, in fact, can draw unwanted attention.

Is There a Site for Concealed Carry Permits Online?

Very few states allow you to complete the required training material entirely on an online site. The vast majority have either an “in person” training requirement or no training or permitting requirement whatsoever. It’s important to check your local laws before attempting to obtain any online concealed carry permit.

Is Concealed Carry Worth the Trouble?

If you find yourself in a situation where your survival hinges on your ability to defend yourself, having a firearm could mean the difference between life and death. But there is no way to predict the future, so it is impossible to predetermine whether concealed carry is “worth it” to you. The decision to carry a firearm is a highly personal choice that should only be made after weighing the pros and cons against your unique situation to determine what’s right for you. Handgun carry brings with it a high degree of responsibility, and the decisions surrounding concealed carry should not be made lightly.

Do I Need Concealed Carry Training?

Increasingly, states are lowering or eliminating the training requirement necessary to carry a gun concealed for self-defense purposes. Whether or not your state requires training, concealed carry classes are important to seek out as your resources allow. There are several options available to people beyond the basic firearms safety or introductory shooting class often required to get a license or permit.

For example, national-level traveling trainers offer courses on advanced shooting skills, legal issues, first aid medicine, criminal assault patterns, and more, all geared toward the private citizen who chooses to carry a gun. In the same way you can’t just buy a musical instrument and expect to know how to play it without some instruction, buying and carrying a gun doesn’t ensure that you’ll be instantly imbued with the knowledge to safely incorporate it into your life (let alone navigate the chaotic nature of a self-defense encounter).

So even if your state does not require training, it’s a good idea as a responsible gun owner to become as highly trained as possible. There are several helpful websites with information on classes taught near you by nationally recognized experts covering skills and subject matter you’re not likely to find in your basic pistol class.

Do I Need a Concealed Carry Permit for Constitutional Carry?

Are There Other Words for “Concealed Carry Permit”?